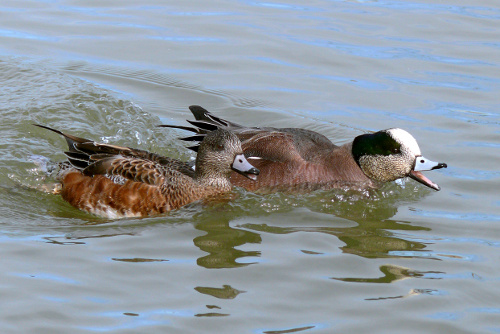 Characteristics and Range The American Wigeon differs from most other dabbling ducks in having a short, narrow bill, similar to that of a goose, an adaptation to grazing both terrestrial and submerged aquatic plants (Mini et al. 2014). Its range is largely restricted to North America. The American Wigeon is one of the most northerly breeding dabblers, with the bulk of the population nesting in tundra, boreal and prairie regions, migrating short to medium distances to winter along Pacific and Atlantic coasts and across the southern part of the continent as far south as the Caribbean and Central America. The southwest British Columbian coast supports the highest wintering densities of the species (Mini et al. 2014).

Distribution, Abundance, and Habitat The American Wigeon is a relatively widespread breeding bird in British Columbia east of the Coast Mountains, and locally in the Georgia Depression ecoprovince. This distribution does not appear to have changed since The Birds of British Columbia was published in 1990.

The Probability of Observation model shows the main concentrations are on the Chilcotin and Cariboo plateaus and in the Thompson River drainage of the Central and Southern Interior ecoprovinces, and in the Peace River lowlands of the Boreal Plains Ecoprovince, the same centres of abundance noted by Campbell et al. (1990). Mini et al. (2014) note that northeast British Columbia and neighbouring boreal Alberta supports some of the highest breeding densities across the bird's entire range. Breeding occurs at elevations from sea level to about 1,200 m; the small sample of Atlas point counts, a poor method for assessing abundance of this duck, suggests that it may be most numerous between 250 and 500 m.

Preferred breeding habitat is invariably close to wetlands of various types, including rivers, lakes, sloughs and marshes. Nests are hard to find because they are usually well concealed by vegetation, and often situated away from open water, including in brushy habitats (Campbell et al. 1990).

Conservation and Recommendations There are no major conservation concerns for American Wigeon, with the continental population trend being largely stable over the past 50 years, although the recently established North American Waterfowl Management Plan goal of 3 million birds has only been exceeded once since 1980 (Zimpfer et al. 2013). There has been a shift in centres of abundance with recent large increases in Alaska balancing substantial decreases in the Prairies (Mini et al. 2014), but Atlas data suggest that British Columbia is not a major part of that northwesterly shift.