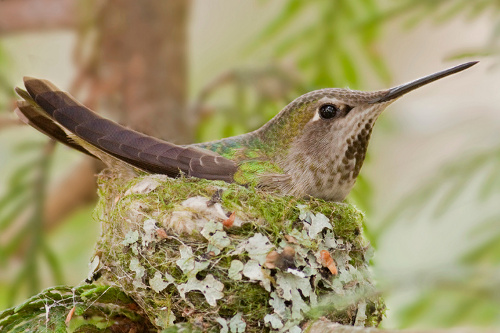 Characteristics and Range The noisy, adaptive, and highly visible Anna's Hummingbird has become a common sight and sound in the southwest corner of British Columbia. Since the 1930s, it has expanded north and east from a range that was previously restricted to coastal California, likely assisted by an increase in non-native flowering plants and sugar-water feeders (Clark and Russell 2012). It arrived in British Columbia in the 1940s, but breeding has only been known here since 1986 (Barnard and Campbell 2007). It is one of British Columbia's earliest breeding birds, starting to nest-build in mid-winter. Females can quickly re-nest (Scarfe and Finlay 2001), some females initiating second nests while young are still in the first nests, and sometimes taking and reusing nesting material from occupied nests (Moran pers. Obs.); one female has been recorded making four consecutive overlapping nests in one season (Pittman 2014).

Distribution, Abundance, and Habitat The Anna's Hummingbird is a resident in the southwest of the province, but may make local movements. Since the publication of The Birds of British Columbia, the breeding range of the species has expanded in coastal British Columbia to include the entire lower Fraser Valley, the southern Gulf Islands and southern and eastern Vancouver Island, with occasional records during the breeding season north to the mouth of the Stikine River. In the interior, the Atlas confirmed breeding in the Similkameen watershed and documented records in the Shuswap and the Okanagan, but with no confirmed breeding in those areas.

The centre of Anna's Hummingbird abundance is the Georgia Depression Ecoprovince, but even here Probability of Observation values were low to moderate, and it was recorded on <0.1% of point counts, mostly at low elevations in the Douglas-fir biogeoclimatic zone.

The Anna's Hummingbird is most commonly found in open habitats associated with humans. It is particularly successful in urban areas, obtaining nectar from native and non-native flowers in gardens and parks. It uses and defends feeders, and also uses sapsucker wells for early morning and late evening feeding. It hawks for small flying prey, even in winter months in urban areas, where warmer conditions may contribute to an elevated supply of insects. The female is often observed collecting calcium salts, needed for breeding, from exposed sources in the urban environment, such as the grouting on buildings and paving stones. The Anna's Hummingbird generally builds well-camouflaged nests in deciduous shrubs and trees, but will also use conifers such as Douglas-fir (Pseudotsuga menziesii). Nests may also be located in garden plants beside houses or even on raised man-made fixtures such as wind chimes. Nests are commonly 1-3 m above the ground, although some nests are higher, including re-used Rufous Hummingbird nests (Barnard and Campbell 2007).