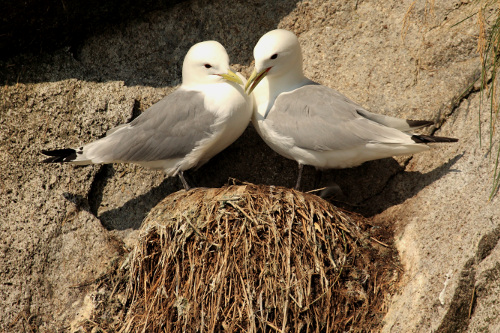 Characteristics and Range The noise from a kittiwake colony tells you how the bird got its name. It's harsh, scratchy "kitty-waake kitty-waake" belies the bird's dainty aspect as it falls away from its cliff nest in a graceful dive. Kittiwakes pick food from the sea surface and occasionally plunge-dive after prey, especially when feeding in a merry mob of murres, murrelets, auklets, and shearwaters. The Black-legged Kittiwake has a circumpolar distribution in the northern hemisphere; in North America it breeds on High Arctic islands and on Pacific and Atlantic coasts (Hatch et al. 2009). There are two subspecies, R. t. tridactyla of Arctic and Atlantic basins, and R. t. pollicaris in the Pacific. Non-breeding birds frequent British Columbia's outer coast, even in summer. Thousands feed in, and migrate through, Dixon Entrance and Hecate Strait.

Distribution, Abundance, and Habitat Although no Black-legged Kittiwake breeding records have been published for British Columbia, two and a half decades of observations at Holland Rock, off the Skeena River in Chatham Sound, confirmed nesting as far back as 1997, and possible breeding well before then (M.E. Hearne pers. obs.). This is the only known nesting site for the subspecies R. t. pollicaris in Canada. Kittiwakes are colonial nesters and once they establish a suitable site they return to it each year. Their nearest nesting neighbours are in southeast Alaska (USFWS 2006).

In July 1993, about 40 individuals were counted on Holland Rock; subsequent visits and observations from the BC Ferries route between Skidegate and Prince Rupert indicate that the population has been increasing. On June 23, 1997, one egg was found in one of three occupied nests located, and on June 19, 2002, there were twenty-three occupied nests, six with one egg. During the Atlas surveys, upwards of 120 adults were seen annually; in 2012, 135 adults and 65 nests were counted on 27 May, and on 14 June, 238 adults and 18 nests were counted.

Holland Rock is a small, rocky islet on a shallow bank with a vertical cliff face on the northwest side. The cement foundations of a destroyed lighthouse there developed a series of horizontal cracks extending into a large cliff-face fissure along which the birds make nests of mud, grass and cedar sprigs.

Conservation and Recommendations The global Black-legged Kittiwake population is very large, and is considered not at risk (BirdLife International 2014). It is encouraging that the only colony of the subspecies R. t. pollicaris in Canada is gradually increasing; it should continue to be regularly monitored. There is a risk that invasive predatory mammals (especially Raccoons Procyon lotor and rats Rattus species) could colonize, either from the mainland or passing vessels; invasive alien mammals are a threat to many seabird breeding colonies in this region (IBA Canada 2015). There is an increasing risk of spills from the expanding major Port of Prince Rupert. Holland Rock and its kittiwake colony should be considered in all impact assessments for industrial, transportation and offshore wind energy development in the area. Holland Rock should be considered for protection and/or conservation management.