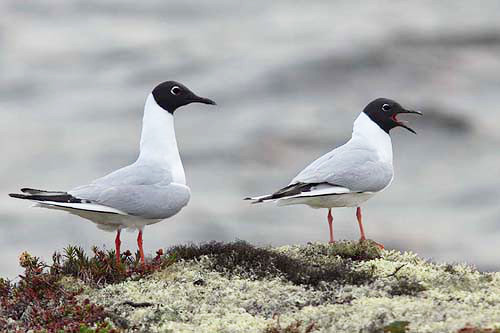 Characteristics and Range The Bonaparte's Gull is a dainty, black-headed gull that avoids landfills and urban handouts, instead picking invertebrates and small fish from at or near water surfaces. Occasionally it soars to catch swarming aerial insects. It may be most conspicuous in spring when it occurs in flocks of thousands along the southwest coast or in much smaller flocks during its concentrated spring migration along river valleys to the interior of the province in late April and early May. It is small, agile, and tern-like, vocalizing a harsh "yeerrr". It breeds only in North America, nesting in wetlands across most of the northern forest biomes and wintering along the Pacific and Atlantic coasts.

Distribution, Abundance, and Habitat The Bonaparte's Gull breeds as single pairs or in small loose colonies across British Columbia's interior north of about 51°N. With the exception of adding two confirmed breeding records in the western Boreal Plains, The Atlas indicates no change in the pattern of distribution since The Birds of British Columbia was published in 1990: nesting occurs at widely scattered locations across northern British Columbia, locally in the Taiga and Boreal Plains, and south through the Fraser Basin to Bridge Lake on the Cariboo Plateau. The largest colony reported numbered 11 nests, in the Fort Nelson River lowlands.

The centres of its provincial abundance are the plateaus of the Central Interior and Sub-Boreal Interior, and northern parts of the Taiga Plains, Northern Boreal Mountains, and to a lesser extent the Boreal Plains ecoprovinces. No major changes in abundance appear to have occurred since The Birds of British Columbia was published. Both Campbell et al. (1990) and the Atlas highlight the inaccessibility of a huge area in the north-central part of the province, which may support breeding Bonaparte's Gulls.

The Bonaparte's Gull prefers wooded islands for nesting. It usually nests in conifers, but avoids dense conifer stands, selecting trees from which it can command a view and keep a lookout for potential predators. The nest is almost always placed 4-6 m high, and is usually very hard to spot (Burger and Gochfeld 2002). Adults will swoop and call at intruders to the nesting area. Atlas records show that the Bonaparte's Gull is most abundant in Sub-boreal Pine and Spruce, Sub-Boreal Spruce and Boreal White and Black Spruce biogeoclimatic zones between 700 and 1,500 m elevation.

Conservation and Recommendations In British Columbia, as in other parts of its boreal breeding range, it is difficult to obtain accurate population estimates and trends because of the Bonaparte's Gull's dispersed nesting pattern and because of the current inaccessibility of a large part of its potential breeding habitat. More study of this relatively poorly known species is needed. Canada bears a high responsibility for this species' conservation since such a high percentage of the world's Bonaparte's Gulls breed within Canada's political boundaries (Environment Canada 2011).