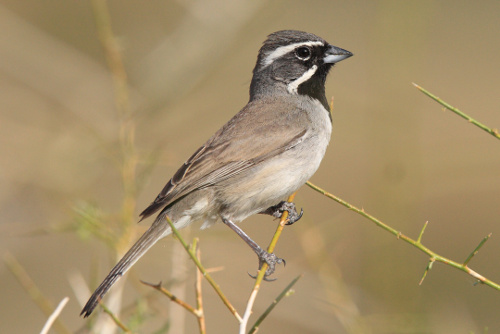 Characteristics and Range The strikingly-plumaged Black-throated Sparrow is a bird of upland arid shrub-steppes across southwestern parts of North America. Northern breeding populations migrate south to winter in the southern part of the breeding range, which extends south to Mexico's Sierra Madre (Johnson et al. 2002). It reaches the northern limit of its breeding range in the eastern foothills of the Cascade Mountains in southern Washington, where it has nested intermittently in very small numbers since 1987 (Weber 2015). It is considered a casual (vagrant) visitor to southern interior British Columbia (Campbell et al. 2001).

Distribution, Abundance, and Habitat There are no breeding records of the Black-throated Sparrow in British Columbia (Campbell et al. 2001); the nearest known breeding record is 240 km south of British Columbia, in the Okanogan Valley (Weber 2015). Two singing males in rocky, arid Antelope Brush (Purshia tridentata) - sagebrush (Artemesia) grassland immediately west of Osoyoos in July 2008 is the only record reported to the Atlas.

There may be a pattern of Black-throated Sparrow occurrence in British Columbia that coincides with drought years in the species' core breeding range (Weber 2015), resulting in birds moving farther north. The Okanogan Valley records since 1987 suggest a northward range expansion. Whilst the Atlas categorizes it as a possible breeder, casual or accidental may be the more appropriate status to assign.

Conservation and Recommendations The site where all previous and subsequent (to the Atlas) breeding season records have occurred has no protection and may be under threat of future residential development. Birders are encouraged to submit observations of the species to programs like eBird. In addition, tracking records in Washington will help clarify whether there is any increase in frequency that might indicate a gradual northward expansion.