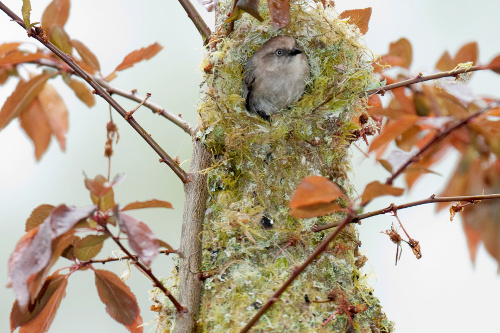 Characteristics and Range The Bushtit resides along forest edges and in gardens through much of western North America and the highlands of Central America (Sloane 2001), reaching the northern limit of its range in British Columbia. Lively and conspicuous flocks during the non-breeding season dissolve into pairs for the breeding season. These pairs are not usually alone, however; the Bushtit is one of the first birds known to breed cooperatively, i.e., pairs have help from other individuals (Skutch 1935).

Distribution, Abundance, and Habitat In Canada, the Bushtit is restricted to southwestern British Columbia, where its distribution is rather neatly defined by the boundary of the Georgia Depression Ecoprovince. Its northward expansion in the 20th Century (Munro and Cowan 1947, Butler 1981) has largely halted and its range in the province has essentially not changed since.

Campbell et al. (1997) reported the species is most abundant in the Georgia Depression Ecoprovince centered on the lower Fraser River Valley and Nanaimo region. The Atlas Probability of Observation and point count results concur with their conclusion, and suggest that it is more common in the Coastal Douglas-fir than in the Coastal Western Hemlock biogeoclimatic zone. In British Columbia it is found at low elevations, seldom recorded above 250 m. It made the transition from natural oak woodland to gardens and open forests following agricultural and urban development along the Pacific Coast (Hagar and Stern 2001).

Conservation and Recommendations There are no immediate conservation concerns for the Bushtit in British Columbia. Christmas Bird Count data indicate that it has undergone a large population increase since 1970 based on data (Environment Canada 2011). Two factors postulated in the range expansion are warming climate and increasing suburban and semi-open rural habitats (Butler 1981). Further monitoring will help determine whether the 20th Century range expansion is continuing or not.