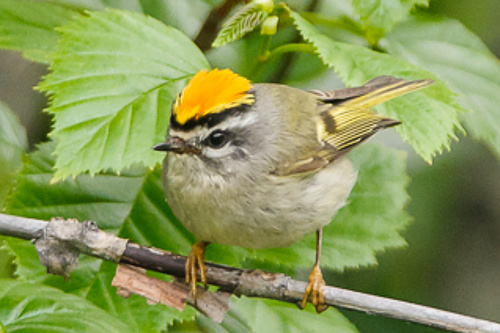 Characteristics and Range One of our tiniest songbirds, the Golden-crowned Kinglet is known for moving rapidly in small flocks flitting high up through the trees, and giving extremely high-pitched calls that most of us lose the ability to hear with age. It is a bird of cool, moist, coniferous forests on the Pacific coast and in mountain and boreal regions. It has been expanding its breeding range southward at lower elevations into conifer forests in central and eastern North America. Two subspecies are found in British Columbia: R. s. olivaceus, which breeds west of the Coast Mountains and winters coastally south to California; and R. s. apache, which breeds from Alaska south through the Cascades, Sierra Nevada, and Rocky Mountains to the Sierra Madre Occidental in Mexico, and winters from southern British Columbia south over the breeding range (Swanson et al. 2012).

The Probability of Observation map defines two areas where the species is most likely to be found: in the Georgia Depression and Coast and Mountains; and in the Sub-Boreal Interior and Southern Interior Mountains ecoprovinces. Data from point counts reveal a clear dichotomy in abundance patterns between these two areas and the two subspecies, with the greatest abundance of coastal R. s. olivaceus below 250 m, and the highest abundance of interior R. s. apache from 1,250 to 1,750 m. Kinglets are most abundant in the moister Coastal Western Hemlock biogeoclimatic zone in the Coast and Mountains ecoprovince; lower abundances of similar values occur in the other three favoured ecoprovinces, the drier Coastal Douglas-fir, and interior spruce- and hemlock-dominated biogeoclimatic zones. This contrasts slightly with Campbell et al. (1997), who noted the species was most numerous in the Georgia Depression.

Conservation and Recommendations There has been a significant decrease in abundance in British Columbia since 1970 (Environment Canada 2014), consistent with trends in other western parts of its range (Swanson et al. 2012). Although there is currently little conservation concern for this very abundant species overall (Environment Canada 2011), the Golden-crowned Kinglet has a strong affinity for old-growth conifer forests for nesting and, therefore, is sensitive to logging and other habitat disturbances; that may explain population declines in the western portion of the range (Swanson et al. 2012).