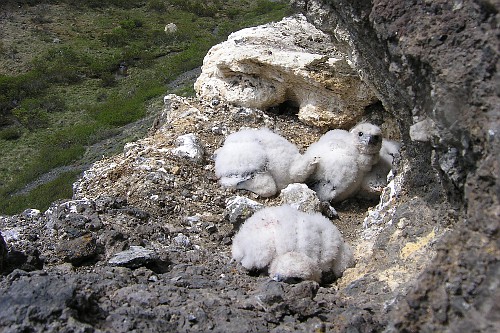 Characteristics and Range The northern-dwelling Gyrfalcon is the largest falcon in the world. It breeds mostly along the Arctic coasts of North America, Europe and Asia (Booms et al. 2008). Over its range, its colour varies from white through silver-grey to almost black; silver-grey is the most common morph in British Columbia. It nests on cliff ledges at sites that are often used for decades and where considerable amounts of guano can accumulate. Ptarmigan provide the Gyrfalcon's main prey in British Columbia and productivity appears dependent on ptarmigan numbers. Large size and hunting prowess make the Gyrfalcon a popular bird with falconers, who breed and train them to hunt waterfowl and other game birds.

Distribution, Abundance, and Habitat Most Gyrfalcons breed along the Arctic coast; however, a few breed in the northwest portion of the Northern Boreal Mountains Ecoprovince of British Columbia (Campbell et al. 1990). Within this ecoprovince, sightings have occurred during the breeding season as far south as the Spatsizi River and as far east as Toad River, suggesting that the breeding range might be more widespread than is currently known. A past breeding season observation of a Gyrfalcon in the northern foothills of the Rocky Mountains (Chutter et al. 1992) raises the possibility that the species may occasionally attempt to breed in northeastern British Columbia, but there are no Atlas-period records from this region. The Gyrfalcon is a migratory species and occurs over more of the province during migration and in winter, particularly along the southwest coast, where it can be seen in open habitats around populated areas in the lower Fraser River valley and southeast Vancouver Island.

Annual breeding season surveys have been conducted for the population in the southwest corner of the Yukon since 1983 (Mossop and Munro 1990). This population extends into the extreme northwest corner of British Columbia, and in years when British Columbia Wildlife Branch biologists participated in the surveys, this area was included. Eight eyries are known from this part of the province; however, while up to 7 of these eyries have been deemed occupied in a single year, no more than 3 have been productive at the same time. Based on these data and other sightings, the British Columbia Wildlife Branch estimates the breeding population in the province to be fewer than 20 pairs (Chutter 2008).

In British Columbia, the Gyrfalcon nests on cliff ledges on mountains in alpine areas, usually adjacent to rivers or lakes. Occasionally, it nests on cliffs of river banks and in abandoned Golden Eagle nests.

Conservation and Recommendations Whilst the Gyrfalcon is designated as Not at Risk nationally by COSEWIC, it is Blue-listed in British Columbia due to its small known breeding population (British Columbia Ministry of Environment 2014). Capture of migrating first year birds for falconry is allowed under permit but is extremely limited; annual harvest varies from zero to three birds. Only experienced resident falconers are permitted to capture wild Gyrfalcons; export of wild birds is not allowed.

Discovery of new eyries is extremely difficult due to the remoteness of their locations; however, once located they can be protected and surveyed because of strong fidelity to nest sites. Therefore, observations of potential breeding sites should be reported to the British Columbia Conservation Data Centre to enable further assessment.