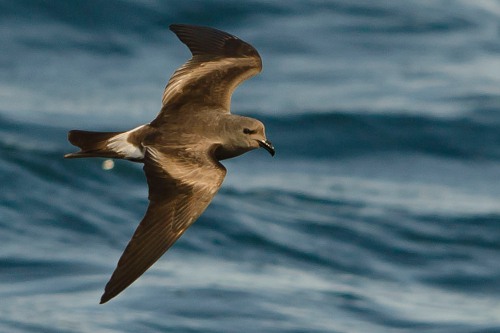 Characteristics and Range The Leach's Storm-Petrel is the most widely distributed "tube-nosed" seabird in the Northern Hemisphere, with large breeding populations in both the North Atlantic and North Pacific oceans (Huntington et al. 1996). Most disperse far offshore outside the breeding season, mainly to tropical waters. The presence of this small, dark-grey-to-black, burrow-nesting seabird is most often detected by the unmistakable "chatter call" it gives while in flight on its nocturnal visits to the colony.

Distribution, Abundance, and Habitat The Leach's Storm-Petrel is widely distributed in British Columbia, with breeding colonies scattered along the west coast of Vancouver Island, in the Haida Gwaii archipelago, and in Queen Charlotte Sound and Queen Charlotte Strait (Campbell et al. 1990). Highly oceanic, it forages over deep water along and seaward of the continental shelf, feeding on zooplankton and other small marine organisms.

Approximately half a million pairs breed on colonies scattered widely along the British Columbia coast. However, Leach's Storm-Petrel can easily be overlooked on non-targeted surveys because it breeds on remote islands, is active on the colony only at night, and nests in subterranean burrows. Twelve island groups designated as Important Bird Areas support breeding colonies (IBA Canada 2015), but few were visited during the Atlas.

In British Columbia, the Leach's Storm-Petrel nests both in the open and more commonly under forest canopy (Campbell et al. 1990). The species uses a natural cavity for nesting, but more commonly digs a burrow, generally avoiding roots and logs (Vermeer et al. 1988). It ranges widely over the open sea to forage during the breeding season.

Conservation and Recommendations Very little information exists on population size and trends for the Leach's Storm-Petrel in British Columbia The species may be vulnerable to introduced predators, especially rats (Rattus species) and Raccoons (Procyon lotor), which have decimated some British Columbia seabird colonies. Marine contaminants and pollutants including plastic particles, and oiling may also have negative effects.