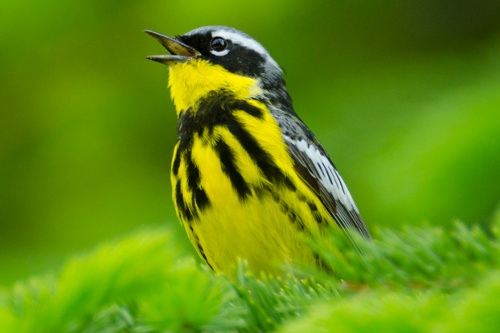 Characteristics and Range One of the most beautiful of the New World wood-warblers, the Magnolia Warbler is not well known to many British Columbian birders due to its north-central distribution in the province. However, as birders head north to explore the avian treasures of the montane and boreal forests, they can be richly rewarded with sightings of this lively warbler. The Magnolia Warbler breeds across the boreal forest from the Atlantic Coast in the east to British Columbia in the west. It winters in southern Central America and various Caribbean Islands (Dunn and Hall 2010).

Distribution, Abundance, and Habitat The Atlas confirmed the general pattern of distribution described in The Birds of British Columbia, although Atlas records are more widespread, as expected with increased survey effort. The Atlas extends known areas of breeding into far northeastern and southeastern British Columbia, and confirms the most southerly known breeding for the species in the province, in the West Kootenay. Direct comparison between The Birds of British Columbia and Atlas periods is clouded by observer confusion over banding codes of Magnolia and MacGillivray's warblers, which forced Campbell et al. (2001) to eliminate many possible records of Magnolia Warbler.

Atlas Probability of Observation model results highlight two major areas where the species is most likely to be found, corresponding with the major clusters in distribution: the Sub-Boreal Interior Ecoprovince into the Southern Rocky Mountain Trench, which is where the species was considered most numerous by Campbell et al. (2001), and the Fort Nelson River lowlands in the Taiga Plains Ecoprovince, a concentration that was not known when The Birds of British Columbia was published.

Within these regions, the Magnolia Warbler prefers coniferous and mixed forests dominated by spruce (Picea) species and Western Hemlock (Tsuga heterophylla) at low-mid elevations. Atlas point count data show that abundance was highest at elevations between 250 and 1,000 m in the Interior Cedar-Hemlock, Sub-boreal Spruce and Boreal White and Black Spruce biogeoclimatic zones. Within these climate-forest types, it favours mixed moist woodlands that have a dense understory of shrubs. Spruce saplings are highly favoured, and its nests are often hidden in thick young growth, seldom more than 5 m above ground (Dunn and Hall 2010), making them hard to locate. The thick understory frequented by breeding Magnolia Warblers is a key reason why less than 10% of atlas squares where the birds were found were confirmed to support breeding.

Conservation and Recommendations The Magnolia Warbler is currently not of conservation concern within British Columbia. Continued monitoring will help clarify whether it is actually expanding its range in the province, as Atlas records potentially suggest.