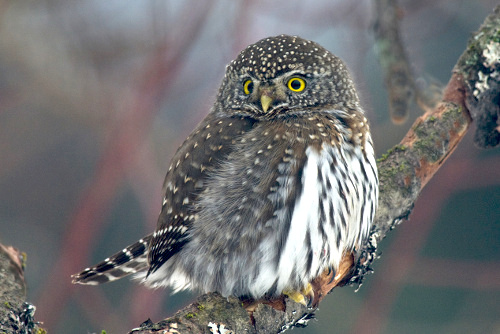 Characteristics and Range Its diminutive size and diurnal habitats make the Northern Pygmy-Owl unique among the owl fauna of British Columbia. Despite its size, it is a fierce predator on birds and small mammals, often taking prey larger than itself. It is easily recognized by its round owl face, small size and relatively long tail. A pair of spots on the back of the head mimics large eyes, perhaps leading other birds to think that it is keeping an eye on them even when looking away. A calling pygmy-owl will often attract a large, agitated flock of small birds; this mobbing effect has led to the practice of many birders to whistle like a pygmy-owl while in a quiet forest, thus bringing out many chickadees, nuthatches and other small birds that might have otherwise gone unseen. The Northern Pygmy-Owl is resident in the western cordilleras of North America from southeastern Alaska and northwestern British Columbia south to Central America. There is no evidence of latitudinal migration but individuals often descend to valley bottoms in winter.

Distribution, Abundance, and Habitat Northern Pygmy-Owls are found throughout the forests of British Columbia, except absent from Haida Gwaii and the Taiga Plains. The overall distribution is very similar to that reported by The Birds of British Columbia in 1990. The cluster of reports on northern Vancouver Island comes from targeted surveys, and may account for the higher Probability of Observation there. The data are too sparse to reveal details of altitudinal or habitat preferences; the species is found in all forest types within its British Columbia range, but generally prefers more open forests (Holt and Peterson 2000). Population density is almost surely lower in the northern half of the province. The lack of records from valley bottoms in the Lower Mainland is probably a result of forest clearing and urbanization in that area.

Conservation and Recommendations The Blue-listed subspecies G. g. swarthi is endemic to Vancouver Island. Breeding Bird Survey results suggest that Northern Pygmy-Owl populations have declined in Canada since 1973, but data are few, so there is low confidence in this trend calculation. Logging practices that remove snags from the landscape can exclude pygmy-owls from those areas because of the owls' need for woodpecker cavities for nesting (Holt and Peterson 2000).