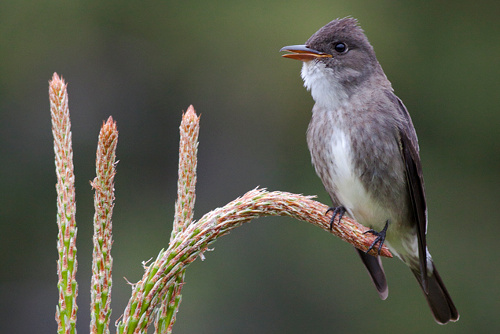 Characteristics and Range The Olive-sided Flycatcher, with its familiar "quick-three-beers" whistled song is, with the exception of the kingbirds, the largest flycatcher that breeds in British Columbia. It breeds throughout North America's Boreal Forest and the coniferous forests of the western mountain ranges, and in two isolated coniferous patches of the southern Appalachian Mountains. This flycatcher migrates long distances to winter in Central and South America.

Distribution, Abundance, and Habitat This species is widespread across southern British Columbia, and east of the Coast Mountains. It probably breeds throughout the province where there is any conifer forest, except Haida Gwaii where it is absent. Because it occurs at relatively low densities, it was likely unrecorded in many 10-km squares where it is present. There is no indication of a change in distribution from that depicted by Campbell et al. (1997).

The Probability of Observation map indicates that the highest likelihood of finding the Olive-sided Flycatcher is on the plateaus and in the mountain ranges of the Central Interior and Sub-Boreal Interior ecoprovinces where the Mountain Pine Beetle (Dendroctonus ponderosae) epidemic has been most extensive, and in smaller areas in the Georgia Depression, the Cascade Mountains, and the Rocky Mountains in southeastern British Columbia. Atlas point counts show that the species reaches highest abundance locally in the Coastal Douglas-fir biogeoclimatic zone, but the core of the provincial population is in the spruce, hemlock and Douglas-fir dominated biogeoclimatic zones of the Sub-Boreal, Central, and Southern Interior and Southern Interior Mountains ecoprovinces, at elevations between 1,250 and 2,000 m.

This species seems to prefer cool, mesic or moist conifer forest with tall trees; however, it will occupy younger forest with scattered tall trees or snags. Dead treetops or tall snags are heavily used as foraging locations, much more so than by most other North American flycatchers.

Conservation and Recommendations The Olive-sided Flycatcher has shown a major, sustained and widespread decline based on Breeding Bird Survey data (Sauer et al. 2014), leading to its Blue-Listing in British Columbia, Threatened status under Canada's Species at Risk Act (COSEWIC 2007), and Near Threatened status globally (BirdLife International 2015). It is probable that multiple causes are involved, but loss and degradation of habitat on both breeding and wintering grounds is likely a major factor in these declines. Whilst the species shows apparent flexibility in choice of breeding habitats, there is local evidence that harvested landscapes may be ecological traps and reproductive success is higher in fire origin stands (Robertson and Hutto 2007). These long-distance migrants may also be impacted by climate-driven asynchrony between migration/breeding phenology and insect abundance (Blancher et al. 2009). Testing hypotheses and developing conservation solutions is a very high priority.