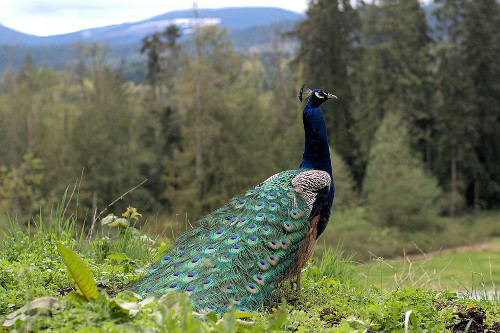 Characteristics and Range Indian (or Blue) Peafowl is one of the world's most beautiful birds and undoubtedly one of the most recognized. It is native to the Indian Subcontinent, but is held in captivity all around the world and often allowed to range free. In North America, there are established, self-sustaining populations in Florida, California and on Hawaii (Kannan and James 1998). Campbell et al. (1990) considered this species "hypothetical" in British Columbia, documenting two populations that were accidentally established in the province. It is still unclear if the species is living unassisted in the province, although a brood raised successfully during the Atlas period, at the summit of Mount Work on the Saanich Peninsula of Vancouver Island, indicates that it may be able to reproduce unaided in southwest British Columbia. Free ranging, domestic birds likely mix with feral birds, making it difficult to assess the true population status of this species in the province.

Distribution, Abundance, and Habitat The Sidney Island population mentioned in The Birds of British Columbia is still present, but the Langford population appears to have been extirpated by direct control. Field work for the Atlas found apparently feral populations in the East Sooke area and on the Saanich Peninsula. The East Sooke birds are known to have been present since 1998 or earlier (Anon. 2003) and are apparently spreading. Resorts and rental properties from East Sooke to Shirley advertise "wild peacocks" as an attraction. Peafowl are large, messy, and noisy, and can be garden pests. They are regarded by some as nuisance birds. The populations persist despite local ad hoc trapping and relocation efforts and lethal control (Daigle 2014, Anon. 2003). It is possible that other populations are established in British Columbia But went unreported by Atlas participants since the species is not regarded as a wild bird in the province (e.g., Cannings 2014).

No abundance estimate is available, but the population is small and likely below 150 mature adults.

Indian Peafowl use a mixture of suburban, rural, agricultural and natural habitats on southern Vancouver Island and the Gulf Islands.

Conservation and Recommendations This is an alien species that has shown the ability to establish itself in a wide variety of habitats in other parts of the world. The impact of the species on local ecosystems is not known, but the species consumes seeds, insects and reptiles and carries a number of avian diseases (Kannan and James 1998). If the species persists or expands, their impact should be studied. Note that Hill (1990) and Galusha and Redd (1992) studied a feral population on Protection Island, Washington State, relatively close to populations in British Columbia.

Populations should be monitored and controlled if the species appears to increase in numbers or expand their range. California has public education campaigns to discourage peafowl establishment in areas where they are likely to become nuisance birds, which may have application to British Columbia. Kannan and James (1998) point out that virtually nothing is known about the species ecology in its introduced range, and provide a list of potential research topics.