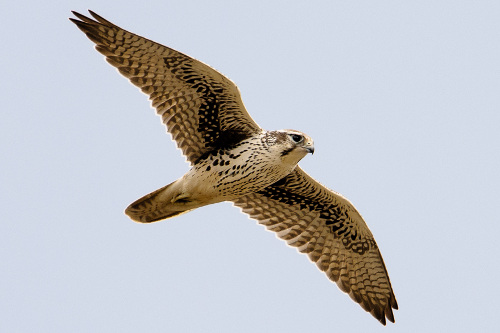 Characteristics and Range The Prairie Falcon is a crow-sized raptor, similar in size and appearance to the Peregrine Falcon, but sandier-coloured with a narrower "moustache", and a diagnostic dark triangular patch on its underside where the wings join the body. It primarily preys on medium-sized mammals such as ground squirrels and birds such as larks. The Prairie Falcon breeds across drier regions of western North America (Steenhof 1998).

Distribution, Abundance, and Habitat In British Columbia, it is a rare breeder in the Southern and Central Interior ecoprovinces. If confirmed, an outlying observation by atlassers of Prairie Falcons possibly breeding near Burns Lake would extend its known breeding range considerably farther north. Prairie Falcons are sometimes observed in the Kootenays, particularly in the fall, but breeding has yet to be confirmed.

The Prairie Falcon population in British Columbia is at an all-time low. Historic reports suggest that 87 potential nest sites were known in the province, though some of these are questionable and there are no data on how many may have been active in a single year (Cooper and Beauchesne 2004). In the late 1990s and early 2000s, various surveys for Prairie Falcons were conducted resulting in estimates of 10-20 breeding pairs across its provincial range. In 2010, a provincial survey of known and historic Prairie Falcon breeding sites found only 3 occupied, all in the Cariboo (Hobbs 2010), and atlassers found no additional pairs. One of the longest and best known Prairie Falcon sites in the South Okanagan is now occupied by Peregrine Falcons.

The Prairie Falcon nests on cliffs, either within cavities or on ledges, in open, arid grassland habitats in the southern and central interior of British Columbia. Nests are located near water, usually adjacent to rivers.

Conservation and Recommendations Loss, alienation and fragmentation of foraging habitats through urbanization, changing agricultural practices, and forest encroachment are likely the major causes of the declining population in British Columbia; reduction in abundance of ground squirrels is also likely a major factor (Cooper and Beauchesne 2004). There also seems to be a connection to Peregrine Falcon. When peregrine numbers dropped during the DDT era, breeding Prairie Falcons were more common in the province; however, the recovery of the peregrine in the interior seems to have come at the expense of the Prairie Falcon, as several known sites of the latter are now occupied by peregrines. It is unknown whether the peregrine outcompetes Prairie Falcon, or simply takes over abandoned sites.

Continuing to include Prairie Falcon surveys during the standardized five-year surveys for the Peregrine Falcon is recommended, along with encouraging annual surveys of remaining known sites by biologists and naturalists. All evidence of breeding should be submitted to the British Columbia Conservation Data Centre.