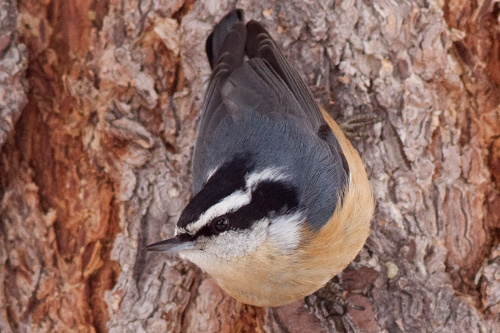 Characteristics and Range The Red-breasted Nuthatch is the most wildly distributed and abundant of the three nuthatch species found in British Columbia Its reddish belly and white eye-stripe readily distinguish it from the other two species. It occurs in coniferous forests across North America from Pacific to Atlantic coasts, chiefly in the boreal forest and western mountain ranges, and also in the Appalachians. During irruption years, birds move into regions not normally frequented in response to food availability or some other factor, and may be found in a wide variety of habitats as far south as the Gulf of Mexico (Ghalambor and Martin 1999).

Distribution, Abundance, and Habitat This species breeds widely across the province from sea level up to 2,350 m, and has colonized several offshore islands, including the Haida Gwaii archipelago (Campbell et al. 1997). The Atlas documents a more extensive breeding season distribution compared to The Birds of British Columbia, however, this likely represents more of an increase in coverage rather than an increasing range.

The Probability of Observation model shows the species is most likely to be detected in the Georgia Depression, parts of the Kootenays, the interior plateaus straddling Southern Interior, Central Interior, and Sub-Boreal Interior ecoprovinces, the upper Peace, and the Liard and Fort Nelson river basins. Province-wide, it is most common from 500 to 1,250 m, suggesting that the mid-elevation plateaus and valley sides of the central and southern interior are the main centre of the provincial population. Campbell et al. (1997) found a similar pattern, noting it was most abundant in the Southern Interior Ecoprovince. Atlas point counts indicate that the Georgia Depression Ecoprovince supports the highest local abundance.

Red-breasted Nuthatch is typically found in mature coniferous forest, less frequently in mixed forest and rarely in deciduous forest (Ghalambor and Martin 1999). It is most often associated with Douglas-fir (Pseudotsuga menziesii), Ponderosa Pine (Pinus ponderosa), and Western Red Cedar (Thuja plicata), and is infrequently found in pure stands of other pine (Pinus) and hemlock (Tsuga) species (Campbell et al. 1997). Atlas point counts show highest abundance in Coastal Douglas-fir, where it is twice as common as in other favoured biogeoclimatic zones. Mature and old-growth forests with high canopies and large trees are most preferred; however, they may also be found in a variety of habitats where mature trees are present, including urban and suburban areas (Campbell et al. 1997).

Conservation and Recommendations This species is not a conservation concern, as it is showing a long-term gradual increase based on Breeding Bird Survey results. It has benefitted, at least in the short term, from the large-scale Mountain Pine Beetle (Dendroctonus ponderosae) outbreak (Norris and Martin 2014), and uses a wide variety of coniferous forests, provided mature or old-growth trees or snags are present. Maintenance of mature trees and snags, particularly "soft" snags with decay already in evidence, in areas to be cleared, will help sustain nesting habitat (Harestad and Keisker 1989, Raphael and White 1984).