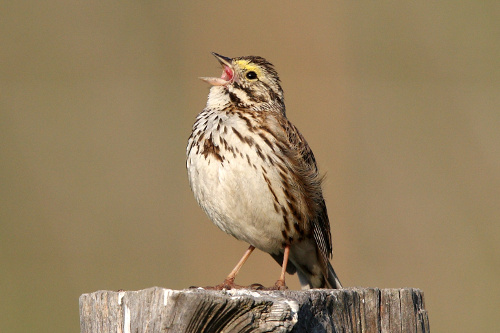 Characteristics and Range This streaky sparrow with the yellow supercilium and high-pitched buzzy song is the most widespread of all North American sparrows. It breeds in suitable habitat across the northern two-thirds of the continent and north to the Arctic Ocean. It is a short- to medium-distance migrant, wintering mainly throughout the southern third of the continent, and south into Central America (Wheelwright and Rising 2008).

Distribution, Abundance, and Habitat Atlas records for Savannah Sparrow are scattered throughout the province with the exception of Haida Gwaii. Comparison with The Birds of British Columbia suggests that there has been little change in the provincial summer/breeding range of this sparrow in the 21st Century. Three of the 28 named subspecies of Savannah Sparrow breed in the province: P. s. anthinus in northern British Columbia, P. s. nevadensis in the interior, and P. s. brooksi along the coast.

The Probability of Observation map and point count data highlight patches of high PObs values and abundance that are associated with alpine and subalpine zones in the Northern Boreal Mountains Ecoprovince and Rocky Mountains; agricultural areas in the Peace River lowlands and Georgia Depression Ecoprovince; forest openings (natural and forestry-related) on the Liard Plateau and the uplands of the Central and Southern Interior ecoprovinces; and, in the latter ecoprovince, with grassy meadows and rangelands along valley floors and lower hillsides in the Nicola and South Thompson valleys. Campbell et al. (2001) reported greatest abundance of Savannah Sparrow in the Northern Boreal Mountains; Atlas results confirm that this is still the case. The lack of a clear relation between elevation and abundance is not surprising since this sparrow occupies a wide range of habitats and elevations and there is great geographic variability in the altitudinal limits of biogeoclimatic zones. For example, the upper tree line (lower limit of alpine meadows) rises across southern British Columbia from about 1,600 m on the coast to near 2,500 m in the Rocky Mountains, and declines northward along the coast to about 1,000 m near the mouth of the Skeena River (British Columbia Ministry of Forests 2008).

The Savannah Sparrow is a bird of open country. It nests on the ground in the shelter of tall grass or shrubs in a great variety of habitats, both natural and human-modified, including grasslands and shrubbery, weedy field-edges, pastures and hayfields, marshes and estuaries, alpine meadows and arctic tundra. Abundance values for biogeoclimatic zones show that this open-country bird finds appropriate nesting habitats within a variety of treed landscapes, including the Boreal Forest, where features such as natural openings (marshes, lakes, beaver ponds) and artificial clearings (clear-cuts, agricultural fields, human settlements) are more important predictors of abundance than broad habitat types.

Conservation and Recommendations Breeding Bird Surveys indicate that the Savannah Sparrow population is stable in British Columbia but undergoing a gradual decline across Canada. Conversion of grasslands to cropland or to urban and industrial land use has destroyed or degraded habitat for this species locally, while clearing forest and woodlands for agriculture has created new habitat. Grasslands and field margins or set-asides with nesting Savannah Sparrows should not be mowed or burned during the breeding season.