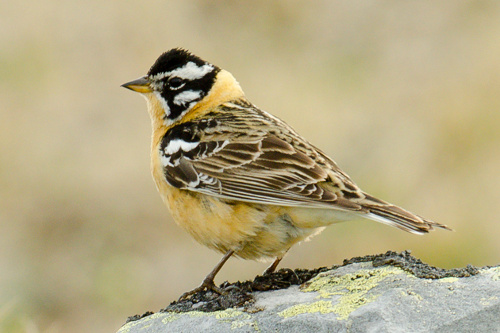 Characteristics and Range Known for its unusual polygynandrous breeding system, where females mate with several males and produce clutches of mixed paternity, Smith's Longspur is an uncommon bird in British Columbia at any time of year. Briskie (2009) shows a breeding range that comprises two areas, a long strip of mainland arctic North America, from north-central Alaska to the southern coast of Hudson Bay at the interface between the tundra and the Boreal Forest, and a disjunct population at high elevations in St. Elias and adjacent mountains of east-central Alaska, southwest Yukon and northwest British Columbia. The species winters mainly in the lower Mississippi watershed.

Distribution, Abundance, and Habitat Atlas records of the Smith's Longspur come from just three 10-km squares in the Northern Boreal Mountains Ecoprovince, with probable breeding in one and possible breeding in two others. The distribution in British Columbia may be much wider than currently known: breeding is likely from high elevation sites over a large area of the Northern Boreal Mountains Ecoprovince (Campbell et al. 2001).

The province's most easily accessed population along the road through the Chilkat Pass was not detected during the Atlas period, despite significant observer effort. The site where the species bred in the 1970s and 1980s no longer appears suitable due to the rapid growth of willow (Salix) species (Cannings 2012). However, this portion of the province is large, poorly explored and it is likely that there is still undetected breeding in this westernmost portion of the Northern Boreal Mountains Ecoprovince.

Conservation and Recommendations A number of species that nest in northern British Columbia are so poorly known that their status is unclear, including Smith's Longspur. Increased biological survey effort at mid-high elevations in northern British Columbia would assist in increasing our understanding of these species. The global estimate for the Smith's Longspur is only 75,000 birds, and work is needed to determine the factors limiting survival and population size of this species (Briskie 2009).