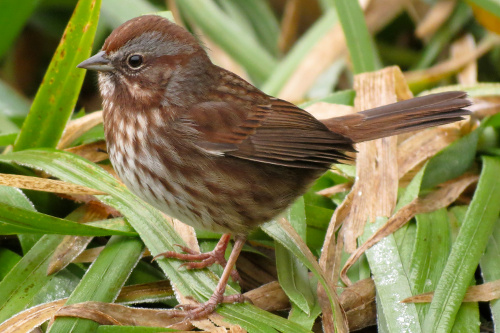 Characteristics and Range A familiar bird to many British Columbians, the Song Sparrow's bright, cheerful songs are early harbingers of spring, and provide a pleasant contrast to their rather plain brown, grey, and white plumage. Song Sparrows breed from the Atlantic Coast in the east to the Aleutians Islands in the west, north to Great Slave Lake and south to the United States Southern Coastal Plains and isolated parts of the Mexican Sierra Madre. Wintering populations often consist of a mixture of resident, partial, and complete migrants reflecting the complex migration patterns of the species (Arcese et al. 2002).

Distribution, Abundance, and Habitat The distribution of Song Sparrows during the Atlas surveys largely matches that known when The Birds of British Columbia was published in 2001. The Atlas records confirmed that the more sparse distribution across northern regions is genuine, and not an artefact of less observer effort as postulated by Campbell et al. (2001). The Atlas records also identified an additional breeding concentration in the valleys bisecting the Stikine and Yukon plateaus, which is perhaps a continuation of the historical trend for gradually increasing numbers of Song Sparrows in the north identified by Campbell et al. (2001). This newly identified area of abundance may also be attributed to more intensive survey effort associated with industrial activity. The low abundance shown in mid-coastal regions of the mainland is likely the result of low survey effort in this hard-to-access area.

Song Sparrows are abundant breeders at lower elevations in the southern two-thirds of the province. The Probability of Observation model and point count data show highest abundance in the Coastal Douglas-fir and Coastal Western Hemlock biogeoclimatic zones of the Georgia Depression and Coast and Mountains ecoprovinces, including Haida Gwaii, as noted by Campbell et al. (2001). The valleys floors of the Southern Interior, Central Interior, and Southern Interior Mountains ecoprovinces are a centre of slightly lower abundance. Province-wide, abundance is much higher below 250 m than above that elevation, and as altitude increases, the bird rapidly becomes much less common.

Conservation and Recommendations Breeding Bird Survey data indicate a long-term decrease across Canada and in British Columbia, but there are no pressing conservation concerns for this abundant, widespread and adaptable sparrow. Human alterations of the landscape may have both positive and negative impacts. Eliminating or reducing riparian and shrubby habitats through grazing, hedge removal for agriculture, dyke and drainage maintenance, may result in losses of breeding habitat. Forest clear-cuts and early re-growth, however, are correlated with increases in abundance of Song Sparrows (Arcese et al. 2002). Careful land management practices to conserve and enhance suitable moist, shrubby habitats will benefit Song Sparrows and many other species with similar requirements.