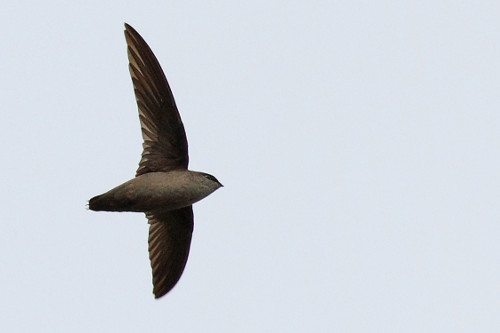 Characteristics and Range The fast-flying, agile Vaux's (pronounced "vox's") Swift often impresses observers as it dashes above riparian groves or darts swiftly over pond surfaces snatching its insect prey. Nesting and communal roosting occur primarily in large, hollow trees, but occasionally chimneys are used as the Chimney Swift does in eastern North America. The Vaux's Swift is a migrant, breeding in western mountain ranges from southwest Alaska to central California, and wintering in southern Mexico and Central America, where there is also a resident population.

Distribution, Abundance, and Habitat The Vaux's Swift is widespread across southern British Columbia, extending north along the length of the Coast Mountains to the St. Elias Mountains in the far northwest, and the Northern Rocky Mountain Trench and foothills. Most observations were made south of about 52°N. Although breeding was probable as far north as the Tatshenshini Basin, the most northerly confirmed breeding was in the Stikine River drainage. This distribution is similar to when The Birds of British Columbia was published in 1990, but more confirmed nesting sites were found during the Atlas surveys.

The probability of observing a Vaux's Swift is highest in the Coast and Mountains, Georgia Depression, and Southern Interior Mountains ecoprovinces. Observations were made from sea level in the Coast and Mountains Ecoprovince to about 1,300 m in the Southern Interior Mountains Ecoprovince, but it is most common between 250 and 500 m elevation, possibly coinciding with favoured nesting areas. The highest PObs and abundance values were all in the hemlock-dominated biogeoclimatic zones, where the swifts are attracted by large, hollow Western Redcedars (Thuja plicata).

Conservation and Recommendations Vaux's Swift is not considered of conservation concern in British Columbia. The province's global responsibility for conservation is considered low and Breeding Bird Survey data, although scant, suggest no clear long-term trend (Environment Canada 2011). Retention of older stands and cavity-bearing veteran nest trees should be part of forest harvesting plans. Retention of suitable anthropogenic structures such as unused chimneys would be useful in some urban areas.