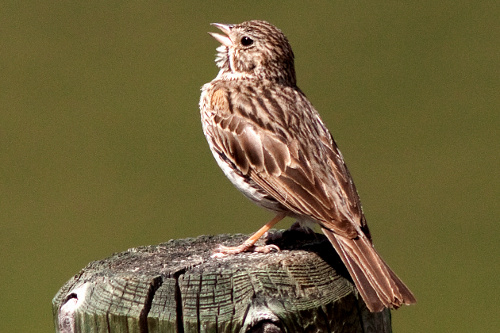 Characteristics and Range This large, streaky sparrow with the often hard-to-see field marks (rufous shoulder and white outer tail feathers) is named for its tendency to deliver its musical song long into the evening twilight. Its breeding range extends from coast to coast across the continent and from the southern fringes of the Boreal Forest to central North America. It winters in the Coastal Plains and drier biomes of the southern United States south through Mexico (Jones and Cornely 2002). Two of four subspecies occur in British Columbia: P. g. confinis is widespread and P. g. affinis has a highly restricted historical range within the Georgia Depression Ecoprovince (Environment Canada 2014).

Distribution, Abundance, and Habitat The Atlas shows a broadly similar distribution pattern to The Birds of British Columbia, with records concentrated in the drier central-southern interior, Southern Rocky Mountain Trench, and Peace River lowlands. The Atlas does not show the high densities of breeding records recorded by Campbell et al. (2001) along the lower Columbia and Kootenay rivers, suggesting local declines. P. g. affinis has declined from its formerly limited range in the Fraser Lowland Ecosection and is now only known from Nanaimo Airport (Environment Canada 2014).

Probability of Observation values confirmed by point count data are in agreement with Campbell et al. (2001), indicating that the centre of highest abundance spans the Southern Interior and Central Interior ecoprovinces. Vesper Sparrow is most likely to be found in the major valleys (e.g. Thompson, Okanagan) of the Thompson Plateau, and on the southern Chilcotin and western Cariboo plateaus. This bird is less common in the southern Rocky Mountain Trench and the Peace River lowlands. Within these areas, Vesper Sparrow is most abundant between 500 and 750 m, an elevation range that includes much of the Bunchgrass, Ponderosa Pine and Interior Douglas-fir biogeoclimatic zones. Slightly lower abundance at 750-1,250 m likely represents the higher plateaus of the Central Interior Ecoprovince.

Conservation and Recommendations Breeding Bird Surveys suggest that the Vesper Sparrow population is undergoing a slight decline. This may stem from loss of habitat due to conversion of natural grasslands to cropland, urban, and industrial areas (Knight et al. 2014). On the other hand, the extent of potentially suitable habitat has been increased by the conversion of forest to farmland that includes grassy fields. In such areas, burning and mowing should be avoided during the breeding season. Specific conservation recommendations for the P. g. affinis subspecies are detailed in the Recovery Strategy (Environment Canada 2014).