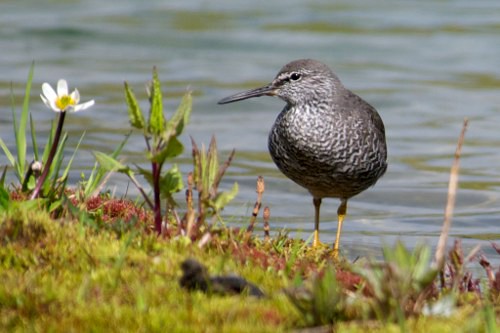 Characteristics and Range The "tattling" breeding season alarm call for which this shorebird is partly named is unknown to most British Columbia birders, who typically only encounter the species on rocky shores during migration. The principal breeding range of the Wandering Tattler is centred on the montane-tundra of the Northwestern Interior Forest BCR, with a smaller population in western Siberia. The remote nature of its tundra breeding range, coupled with widespread "wandering" to its winter range throughout the Pacific Rim (in northern and southern hemispheres), make it one of the least known shorebirds in North America.

Distribution, Abundance, and Habitat The Wandering Tattler reaches the southern extent of its breeding range in the Northern Boreal Mountains Ecoprovince of extreme northwestern British Columbia The westernmost and lowest elevation (down to 900 m) Atlas records are from the Chilkat Pass, and the easternmost, and highest elevation (up to 1,630 m) records are from east of Dease Lake. Breeding was confirmed in two locations, both in the Yukon-Stikine Highlands, with probable breeding recorded in two additional locations in the Dease Lake region.

Atlas survey effort was limited above 900 m in the likely British Columbia range of Wandering Tattler (Northern Boreal Mountains and northern Coast and Mountains Ecoprovinces). Extensive potentially suitable habitat exists across this range, so the Wandering Tattler could be more widespread than the localised spread of Atlas records may suggest. The Birds of British Columbia maps Wandering Tattler's summer distribution across a similar area to Atlas records, and include a possible breeding location a little farther south, at Gnat Lakes.

Atlas records of Wandering Tattler are all from dwarf shrub upland and montane tundra with watercourses, within landscapes shaped by glacial events, mostly within the Northwestern Interior Forest Bird Conservation Region. This is the bird's preferred habitat across its North American breeding range (Gill et al. 2002).

Conservation and Recommendations Further surveys in dwarf shrub and tundra habitats at appropriate altitudes within British Columbia are recommended to improve knowledge of this species' provincial conservation status.