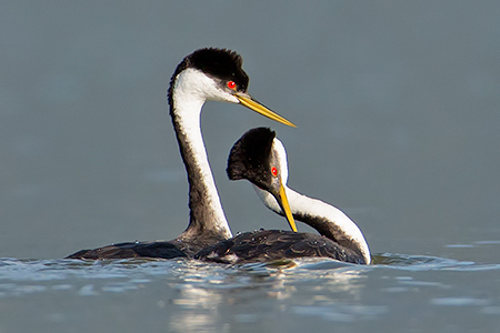 Characteristics and Range The spectacular courtship "dances" of the Western Grebe, the largest grebe in the province, make it an attractive species for public viewing. Endemic to North America, two subspecies are recognized: A. o. occidentalis breeds locally across the Great Basin, Northern Rockies, and Prairie Biomes; and south through the western Great Plains and Southern Rockies. A. o. phemeralis is resident on the Mexican Plateau. The Western Grebe interbreeds with the Clark's Grebe; the two were considered the same species until the 1980s (LaPorte et al. 2013). The Western Grebe winters along the coast from southwestern British Columbia to Baja California.

Distribution, Abundance, and Habitat It is a local breeder and common spring and fall migrant across the southern interior of the province. The breeding distribution has contracted slightly since The Birds of British Columbia was published in 1990, with the Kootenay Lake colony no longer present. Breeding during the Atlas was confirmed at Salmon Arm Bay on Shuswap Lake, and at Duck and Leach lakes in the Kootenay River valley. Breeding was suspected at the Okanagan Lake colony but was not confirmed due to access issues. The Atlas also recorded possible breeding in northeast British Columbia in the Peace River lowlands. Apart from the uncertain status of the Okanagan Lake colony, Atlas surveys fairly represent the breeding distribution of this grebe. Mixed pairs of Western and Clark's grebes have been seen regularly on Shuswap and Duck lakes since 1982 (Campbell et al. 2009).

The centre of breeding abundance is the Southern Interior Ecoprovince. It is difficult to compare recent count data with The Birds of British Columbia, but it seems that the Salmon Arm Bay colony has increased and consistently remains the largest, while the Okanagan Lake and Duck/Leach lakes' colonies have decreased. The localized breeding abundance and distribution reflects the limited combination of suitable nesting habitat and sufficient abundance of prey species.

Nesting occurs amongst Reed Canary Grass (Phalaris arundinacea), cattails (Typha species), or over submerged water milfoils (Myriophyllum species) on freshwater lakes with large areas of open water bordered by emergent vegetation. Birds will occasionally nest amongst flooded willows (Salix species). Emergent plants are used to anchor the nests, but if they are not available, submerged plants growing close to the water's surface may be used.

Conservation and Recommendations The species has been Red-listed in British Columbia since 1992. It was assessed as Special Concern nationally by COSEWIC in 2014, and is expected to be listed as such under the federal Species at Risk Act. Reductions of 50-90% have been reported for populations wintering in the Salish Sea region, but increases have been reported for wintering populations in coastal California, leading to speculation that numbers have generally shifted southwards (LaPorte et al. 2013).

Continued monitoring of colony reproductive success is an important part of understanding the breeding ecology of this species in British Columbia. The presence of migrants must be distinguished when doing early season colony counts. Habitat-use dynamics and threats from predators such as gulls or recreational boating should be documented.

Acknowledgements Marc-Andre Beaucher provided valuable comments about the recent status of the breeding colonies at Duck Lake and Kootenay Lake.