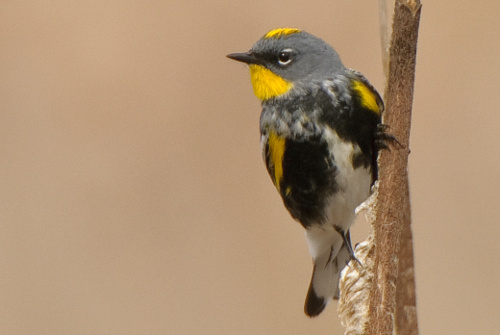 Characteristics and Range The Yellow-rumped Warbler is one of our most common and best-known warblers; with its yellow 'shoulder' mark and bright yellow rump, it is sometimes affectionately called 'butter butt'. It breeds over the whole of northern and western North America. The Yellow-rumped Warbler was formerly considered to be two species, the Myrtle Warbler in the north and east and the Audubon's Warbler in the west. The Myrtle Warbler group (S. c. coronata and S. c. hooveri) breeds in boreal forests across the continent and winters in eastern North America, Central America, and the Caribbean; the Audubon's Warbler (S. c. auduboni) breeds from the Rocky Mountains to the Pacific Coast and winters in the southwestern United States, Mexico, and Central America (Brelsford et al. 2011). In British Columbia, a narrow hybrid zone between these subspecies exists across the Northern Boreal Mountains, Sub-Boreal Interior and Southern Interior Mountains ecoprovinces (Brelsford and Irwin 2009, Campbell et al. 2001). Recent studies in this hybrid zone suggest that Myrtle and Audubon's warblers are stable and genetically distinct forms that may be full species (Brelsford and Irwin 2009). There are also resident populations of the Audubon's Warbler in Mexico and Guatemala (Hunt and Flaspohler 1998).

Distribution, Abundance, and Habitat The Yellow-rumped Warbler is the most widespread breeding warbler in British Columbia, absent only from Haida Gwaii. During the Atlas period, it was the third most widespread bird in the province after American Robin and Swainson's Thrush, as measured by 10-km squares with records. The Atlas greatly increased our understanding of the breeding season distribution, particularly in the northern half of the province and on the coast; this was likely due to increased effort. Some Atlas participants recorded observations to subspecies; after the main pulse of migration was over in mid-June, the Myrtle Warbler was generally distributed east of the Continental Divide and across the Northern Boreal Mountains, and the Audubon's Warbler occurred throughout the rest of the province.

The Probability of Observation is generally high or very high in most ecoprovinces. The pattern of abundance based on point count data showed a general gradient of increasing abundance with increasing latitude, with highest abundances in the Boreal Plains and Northern Boreal Mountains ecoprovinces. This contrasts with Campbell et al. 2001) who note the species reaches highest numbers in the Southern Interior Mountains; the difference may be the result of expanded Atlas coverage, as is the case for some other species. Most breeding is between 1,000 and 2,000 m, with abundance peaking in the 1,500-1,750 m elevation band.

Although Yellow-rumped Warbler is one of the most ecologically generalist of warblers, it prefers mature coniferous and mixed coniferous-deciduous forests. Atlas point count data revealed that spruce (Picea)-dominated biogeoclimatic zones supported the highest abundances.

Conservation and Recommendations There are few conservation concerns for this abundant species. Populations in Canada, including in British Columbia, have shown an overall moderate increase since the early 1970s, and have stabilised at that level during the last decade (Environment Canada 2011, 2014). It does not appear to be adversely affected by forestry practices, as long as mature trees are present for nest site selection.