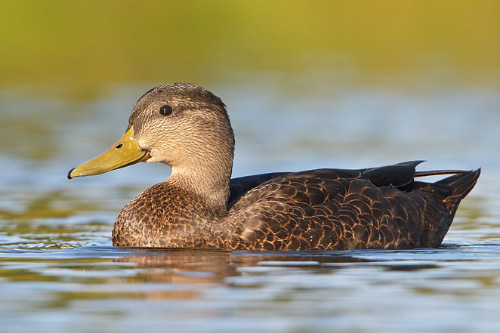 Distribution, Abundance, and Habitat Very small numbers were introduced to south-western British Columbia and Washington during the 1960s and 1970s (Campbell et al. 1990 ). The only Atlas records came from the lower Nanaimo River valley on Vancouver Island, where several pairs that included pure American Black Ducks were observed in 2011. Continued breeding was confirmed by the presence of fledged young in the company of an adult female on July 31st. These birds represent the remnants of a long-established population released in this area in the late 1970s ( Campbell et al. 1990 ).

The population in British Columbia very likely numbers fewer than 50 birds. The number of seemingly pure American Black Duck appears to have dropped dramatically since 2006, as a result of genetic swamping through hybridisation with Mallards. The lack of Atlas period records from the rest of the province suggests that the other introduced populations, and previously known escapees from aviculturalists in the Fraser Valley, have almost or entirely died out.

During the breeding season in the Nanaimo River valley area, it frequents freshwater lakes and ponds, sloughs and marshes within an agricultural and wooded landscape.