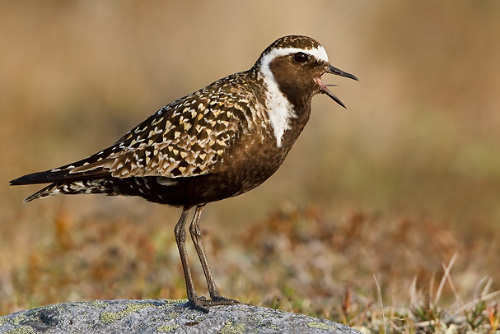 Distribution, Abundance, and Habitat The Atlas provided breeding evidence in two widely separated areas, one in the Northern Boreal Mountains Ecoprovince, and the other in the Central Interior Ecoprovince. These included the first confirmed breeding (fledged young) on the Itcha Range in the Chilcotin, the farthest south the species is known to breed across its entire range (Johnson and Connors 2010). The Birds of British Columbia reports the only confirmed breeding was on the Spatzizi Plateau in 1959 (six pairs, some with downy young), with possible breeding there in 1976, and on the Itcha Range in 1986. Most confirmed and possible Atlas breeding locations were in high alpine areas. These difficult-to-access habitats were understandably lightly covered by the Atlas, and the species might have a more widespread breeding distribution in the high plateaus of north and central British Columbia than the data suggest.

Breeding birds are found on sparsely-vegetated, well-drained, rocky slopes (Johnson and Connors 2010); in British Columbia these habitats are primarily found in high alpine tundra (typically >1,500 m). The locations of the Atlas possible or probable breeding records indicate use of relatively barren high hilltops, close to ponds and >1 km from contiguous forests.

Conservation and Recommendations The American Golden Plover is a Blue-listed species in British Columbia, due to a small breeding population. Although considered a "Species of High Concern" in the 2001-2004 Canadian and United States Shorebird Conservation Plans, new data from across the species' range suggests that the population is larger than expected and relatively stable (Clay et al. 2010, Andres et al. 2012). High alpine tundras where this species might nest in British Columbia generally face few immediate threats, although their future extent might be reduced due to forest and shrub encroachment in warming climates. Continued searching of suitable alpine and tundra habitats in northern and central British Columbia should provide better information on the status and numbers of this species.