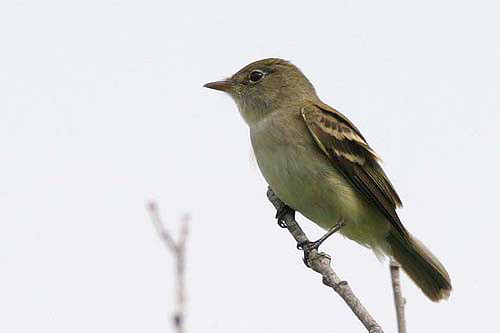 Characteristics and Range When it comes to identification, the Alder and Willow Flycatchers are a confusing species pair in a confusing genus. These two are almost identical in appearance, and can be distinguished in the field only by vocalizations. Combined for many years as the "Traill's Flycatcher", the two were split into separate species as a result of research carried out by Robert Stein in the Cariboo region of British Columbia (Stein 1963). The Alder Flycatcher, the more northerly breeder of the species-pair, has a wide breeding range, mostly in the Northern Forest biome, from western Alaska to the Atlantic Coast, and south to the southern Appalachian Mountains. It migrates very long distances to winter from Mexico south to Argentina.

Distribution, Abundance, and Habitat The Alder Flycatcher breeds throughout northern and central British Columbia, but is absent from Haida Gwaii, Vancouver Island, and the coastal mainland south of Douglas Channel-Kitimat Arm. It is not known to breed in the province south of the southern Cariboo Plateau and the Columbia River valley around Revelstoke at 51°N. However, there are a number of records of singing males on territory in the Nicola Valley and in southeastern British Columbia, and occasional breeding in these areas is a distinct possibility. There is little, if any, change in range from that described by Campbell et al. (1997); some of the few records cited by these authors in southern, coastal British Columbia are now believed to be erroneous.

The Probability of Observation for this species is consistently highest in the Taiga Plains and Boreal Plains ecoprovinces, especially the former, which also supports the highest local abundance on point counts; Campbell et al. (1997) also considered the Taiga Plains to support the highest numbers. Secondary patches of abundance occur on the Interior Plateau, and around the Rocky Mountain Trench where the Sub-Boreal Interior, Central Interior, and Southern Interior Mountains ecoprovinces converge. It is most common between altitudes of 250 and 1,000 m, and is rarely encountered above 1,250 m altitude.

This species is found in thickets of deciduous shrubs or small trees such as alder (Alnus), willow (Salix), and birch (Betula) species, usually but not always in wet areas close to ponds, lakes, or streams. It will also use shrub thickets in drier areas such as along rights-of-way. The Alder Flycatcher and the Willow Flycatcher appear to show little difference in habitat preference where their ranges overlap.

Conservation and Recommendations The Alder Flycatcher has shown a long-term, continent-wide decline based on the Breeding Bird Survey database (Sauer et al. 2014); and recent declines in the Boreal Taiga Plains Bird Conservation Region may be a cause for concern (Environment Canada 2011). However, because the Alder Flycatcher is still one of the most abundant birds in northern British Columbia and nearby areas, and because populations are increasing in some other parts of its range, no significant conservation concerns have been expressed.