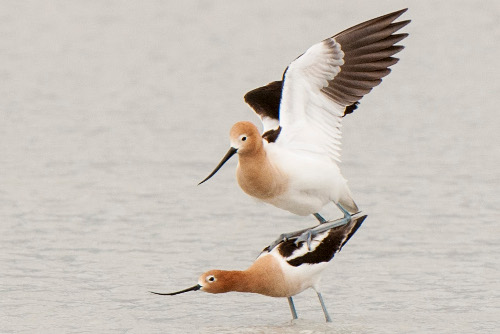 Characteristics and Range With its long upswept bill and striking plumage, the American Avocet is immediately recognizable. Usually found in shallow freshwater ponds, avocets use their long beaks to sweep through the water to capture crustaceans and aquatic insects. The American Avocet is a relatively common, breeding, summer visitor to the Prairie Potholes and the Great Plains, wintering in the United States Southern Coastal Plains, Mexico and parts of Central America.

Distribution, Abundance, and Habitat The American Avocet is a rare summer visitor and localized breeder in British Columbia. The Atlas showed sparse and irregular breeding in three broad areas of the province: the Peace River Lowlands, the Rocky Mountain Trench, and the grasslands extending from the Okanagan through the Douglas Lake Plateau to the southern Cariboo and eastern Chilcotin. This expands on the general pattern in The Birds of British Columbia published in 1990, although, unlike in the 1980s (Gebauer 1999), no avocets were recorded breeding on the southern coast during the Atlas period. Only four sites have had repeated breeding in more than one year, and neighbouring Alki and Robert lakes in the Okanagan are the only sites to have repeated breeding in more than 2 years (Gebauer 1999). Given the conspicuousness of this species, the Atlas data probably reflect accurately its sporadic and localized breeding in the province.

Small numbers have been regular in British Columbia since the 1960s (Campbell et al. 1990; Gebauer 1999). Atlas data suggest that breeding in British Columbia is perhaps more common than in the past. Gebauer (1999) showed 11 records, some with multiple nests, at seven sites over 30 years, 1968-1998. The Atlas confirmed breeding at six locations and recorded probable breeding in another three. Breeding numbers remain low. The highest number recorded by the Atlas was 10 nests at Alki Lake in 2012, compared to a peak of 19 active nests reported there in 1997 (Gebauer 1999).

In British Columbia, the American Avocet is found in low-elevation areas with warm to hot summers. It forages in shallow (<25 cm deep), usually alkaline, freshwater ponds with high seasonal productivity of freshwater zooplankton and aquatic insects. Nests are usually located close to these foraging sites.

Conservation and Recommendations The American Avocet is currently on the British Columbia Blue List because of its small population. On the Canadian Prairies, the species is a regular breeder with a relatively stable population (Gratto-Trevor et al. 2011). Breeding in British Columbia is likely limited by the availability of suitable nesting habitat, but nest predation and human disturbance of nesting colonies are also likely to be important factors. Continued annual monitoring at Alki and nearby Robert lakes is needed to determine how this tenuous breeding population can be protected and allowed to expand.

Acknowledgements Thanks to Les Gyug for contributing data on all counts of birds and nesting evidence from Kelowna.