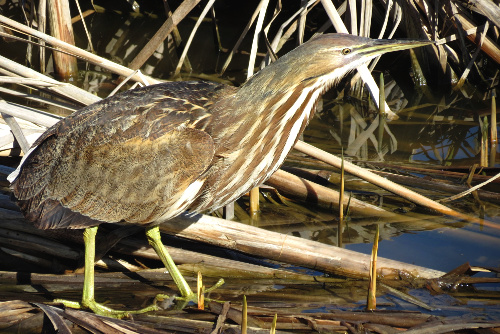 Characteristics and Range The American Bittern's habit of hiding in dense reeds, coupled with its cryptic, striped plumage that blends in with marsh vegetation makes observing the species a challenge. American Bitterns breed in vegetated wetlands from Pacific to Atlantic coasts, from the Boreal Forest in the north to the southern Great Plains in the south. They migrate moderate distances to winter in coastal areas from southwestern British Columbia in the west and the Southern Coastal Plain of the Atlantic states in the east, south through Mexico to Central America (Lowther et al. 2009).

Distribution, Abundance, and Habitat American Bitterns have a wide but rather sparse breeding distribution in the province. They occur in all ecoprovinces except for the Coast and Mountains, Northern Boreal Mountains and Southern Alaska Mountains. Nests and young of this species are very difficult to find, so confirmed breeding was documented in only one 10-km square. Campbell et al. (1990) note that "There have been a number of observations of American Bittern from Vancouver Island, the East Kootenay, and the Peace River lowlands that suggest breeding in these areas. To date, however, nests with eggs or young have not been recorded". This situation has not changed and breeding remains to be confirmed in these areas.

They are found at low densities and have a very low Probability of Observation wherever they occur; in some regions where the species occurs, there is a less than 10% likelihood of finding it after 20 hours of effort. The core of the provincial population appears to be on the wetland-studded plateaus of the Central Interior and Sub-Boreal Interior ecoprovinces. Here, the species was recorded most frequently on point counts. Randomised point counts are not the best technique for sampling this bird's localised wetland habitat. It may be more common than Atlas records suggest. All interior Atlas records are from 440-1,140 m in elevation.

Conservation and Recommendations The American Bittern appears to be declining and retracting its breeding and wintering ranges northward (Lowther et al. 2009). Loss of wetland habitats appears to be the major driver of this decline. Cooper et al. (2003) list a number of recommendations for conservation of American Bitterns in British Columbia, including protection of wetland sites from water loss and drawdown during the nesting season, maintaining larger wetland complexes and protection of wetlands by purchase, conservation agreements, and creating Wildlife Habitat Features for this species under the British Columbia Forest and Range Practices Act.