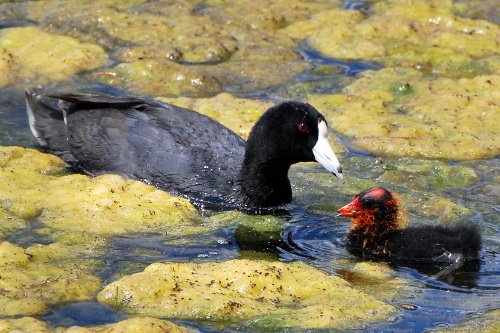 Characteristics and Range The American Coot is the most aquatic and least secretive of the North American rails. Easily recognised by its slaty-black plumage and contrasting white bill and narrow forehead "shield", this coot is a familiar wetland bird across North America. American Coots are generally short to medium-distance migrants, with a range spanning the Prairies, Great Basin and Great Lakes regions south to Central America (Brisbin and Mowbray 2002); they are mainly freshwater birds, but some will use brackish and saltwater habitats, especially in winter.

Distribution, Abundance, and Habitat The centres of American Coot breeding distribution are the lower elevation wetlands of central-southern and northeastern British Columbia. This distribution remains much as it was when The Birds of British Columbia was published in 1990, except that the Atlas did not record any observations in the far north, where the species historically bred in the Liard and Fort Nelson River basin. American Coots overwinter and migrate through British Columbia in quite large numbers, so care was taken with assessing possible breeding records in late spring.

The American Coot is not particularly numerous as a breeding bird in British Columbia, reflected in the relatively low Probability of Observation values, which highlight the lower elevation Fraser Plateau and Thompson-Nicola drainage wetlands, and the Southern Rocky Mountain Trench wetland system as the most likely places to find it. The 500-750 m elevation range, within which these three areas lie, supported highest abundance, although point counts are not the best method for sampling the localised wetland habitats preferred by coots.

Conservation and Recommendations The American Coot's population in British Columbia appears to be stable. It is potentially vulnerable to drought periods and projected long-term drying through climate change (e.g., Hamann and Wang 2006). Hunting pressure is now low, and the long-term population trend across its range is moderately increasing, having recovered from the population crash through wetland loss and hunting in the early 20th Century (Brisbin and Mowbray 2002).