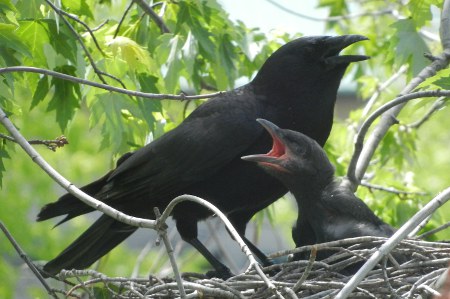 Characteristics and Range The American Crow is the quintessential North American corvid. Its range includes much of Canada and nearly the entirety of the continental United States. Despite centuries of persecution, the American Crow has adapted vigorously to the changes humans have brought to North America, and has flourished in urban and agricultural landscapes across the continent. Historically reviled for their sombre plumage, harsh voices, and their perceived role as nest raiders and scavengers, crows are the subject of increasing scientific and popular interest related to their high intelligence and social complexity, sophisticated learning capacities, close knit-family groups, and the ability to recognize not only individuals of their own species, but individual humans as well (Verbeek and Caffrey 2002).

Distribution, Abundance, and Habitat The American Crow is widespread in British Columbia, absent only from the Pacific Coast where it is replaced by its close cousin the Northwestern Crow, and the far northwest. It is most widely distributed through southern, central and northeast parts of the province. The Atlas documents two apparent northward range extensions for the American Crow since the publication of The Birds of British Columbia in 1997: it is now a confirmed breeder in the Northern Boreal Mountains Ecoprovince, where previously it was considered a casual visitor, and breeding is confirmed in the Taiga Plains where previously it was considered a rare non-breeding summer visitor. It is unclear as to whether this constitutes an actual range expansion or if it is due to more comprehensive spatial coverage by the Atlas.

The Probability of Observation model refines the picture of distribution, illustrating how the American Crow is closely tied to the valley systems, basins and lower elevation plateaus of the Southern Interior, Central Interior, Southern Interior Mountains, Sub-Boreal Interior and Boreal Plains ecoprovinces. Point counts indicate that the core of the provincial population is in Central Interior and Southern Interior, with a patch of high abundance on the Nechako Plateau in the Sub-Boreal Interior spilling into the northern Coast and Mountains Ecoprovince. The American Crow is most common between 250 and 750 m elevation with nearly all observations falling below 1,250 m.

Biogeoclimatic affinities are of limited applicability when considering the broad habitat needs of this species. The American Crow thrives in open disturbed habitats, and aside from avoiding deep forest, is extremely flexible. The two basic requirements are open areas for feeding, and scattered large trees for nesting and roosting; within that broad umbrella they can be found in vacant urban lots, garbage dumps, feedlots, agricultural fields, riverbanks, and everything in between (Verbeek and Caffrey 2002). Any area with a significant human presence within their extensive provincial range should be considered suitable for this habitat generalist.

Conservation and Recommendations There are no conservation concerns for this species. The American Crow population has shown little change since the 1970's based on the Breeding Bird Survey. Versatility and affinity for human disturbance suggest a bright outlook for populations of this fascinating bird.