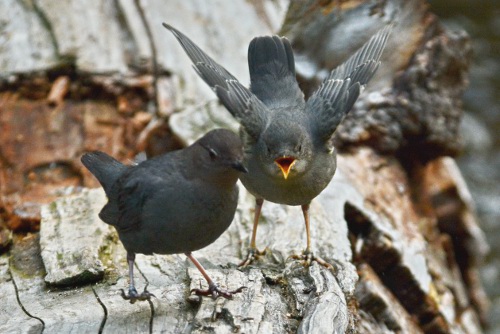 Characteristics and Range It is a constant delight to watch this chunky, grey bird disappear below the water of a fast-flowing river only to emerge shortly and bob up and down on a rock at the water's edge. The American Dipper is resident on fast-flowing mountain streams and cold coastal streams from Alaska and Yukon south through the mountains of western North America and Mexico south to Central America (Willson and Kingery 2011). It winters throughout its breeding range with some short-distance altitudinal migration in colder regions.

Distribution, Abundance, and Habitat The American Dipper is a relatively widespread resident across most of southern British Columbia, particularly in the southwest and southeast, and a sparsely distributed resident elsewhere. This pattern matches Campbell et al. (1997). Nesting is generally below 1,000 m on the coast and usually above 1,000 m in the interior.

It is generally uncommon, even in the areas of highest Probability of Observation in the Georgia Depression, Coast and Mountains, and Southern Interior Mountains ecoprovinces. Campbell et al. (1997) considered it most numerous in the Southern Interior Mountains Ecoprovince. The American Dipper is difficult to survey using randomised point counts due to its narrow, linear habitat preferences, and too few Atlas data were collected to calculate abundance.

Conservation and Recommendations There are no known conservation concerns for this species, although results from the Breeding Bird Survey and Christmas Bird Counts suggest a moderate decrease in the Canadian population since the early 1970s, including in British Columbia (Environment Canada 2011, 2014). American Dippers are dependent upon the maintenance of unpolluted water quality and the protection of riparian habitat; their sensitivity to these two features makes them an indicator of stream health (Willson and Kingery 2011).