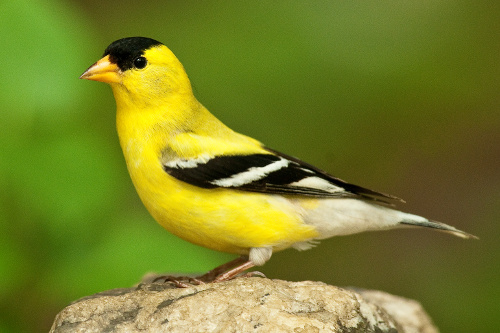 Characteristics and Range This yellow and black "wild canary" is well known for its bright plumage, lively trills and twitters, and undulating flight. The American Goldfinch is abundant and widely distributed in temperate North America (McGraw and Middleton 2009). A resident and short-distance migrant, it ranges from the southern edge of the Boreal Forest south to northern Mexico. Wintering flocks wander in search of suitable food.

Distribution, Abundance, and Habitat The American Goldfinch is widespread at lower elevations across the southern third of British Columbia. The Atlas surveys appear to have expanded the breeding distribution somewhat northward from that known when The Birds of British Columbia was published in 2001. For example the Atlas records show possible breeding at five locations in the Boreal Plains Ecoprovince where it was not reported by (Campbell et al. 2001).

The centre of abundance in the Georgia Depression Ecoprovince has not changed since The Birds of British Columbia was published. High Probabilities of Observation but lower abundances are found along the Okanagan-Similkameen and Thompson-Nicola valley floors in the Southern Interior Ecoprovince. Most breeding is below about 750 m, but abundance is greatest below 250 m decreasing rapidly above that elevation.

Weedy and grassy fields and flood plains, with scattered woody growth, are preferred habitat, but cultivated lands, roadsides, orchards, and gardens are also used. The American Goldfinch is strongly associated with plants of the composite family (Asteraceae) as its main food source (e.g., thistle Cirsium seed).

Conservation and Recommendations Breeding Bird Survey data indicate that the American Goldfinch population in Canada has changed little since about 1970 (Environment Canada 2011), but in British Columbia the species has shown a large population decline (Environment Canada 2014). Although there are few conservation concerns for this common species, in British Columbia, parasitism by Brown-headed Cowbird is a potential factor in the provincial decline, especially on the coast, because their breeding seasons overlap (Campbell et al. 2001); further study is warranted. Continued monitoring will help clarify the degree to which it is expanding its range in the northeastern part of the province.