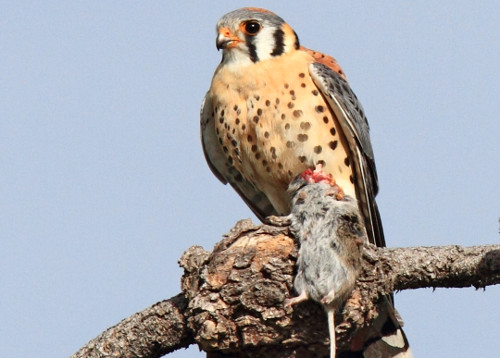 Characteristics and Range The American Kestrel, a brightly-coloured small falcon, not much bigger than a Steller's Jay, is perhaps North America's most common bird of prey. The plumage of the male is a lovely mixture of oranges, rusts, buffs and blues; the female is less strikingly coloured. The American Kestrel breeds across a wide swath of North America from the northern edge of the Boreal Forest southwards through Central and most of South America (Smallwood and Bird 2002). Most northern breeders migrate to the southern half of North America to overwinter.

The Probability of Observation model refines the picture of distribution, highlighting the Okanagan, Thompson-Nicola and middle Fraser valleys as the most likely areas to find the American Kestrel, with extensive moderately high PObs values through the Peace, Fort Nelson and Liard river lowlands, and in the Southern Rocky Mountain Trench. Atlas point counts indicate the bird is most common in the Southern Interior Ecoprovince, and that abundance decreases gradually with increasing latitude. American Kestrels are most common at mid-elevations, between 250 and 1,250 m, and in the Ponderosa Pine, Interior Douglas-fir and Bunchgrass biogeoclimatic zones.

The species prefers to breed in or close to grassy habitats that support a plentiful supply of its invertebrate prey, like grasshoppers, though it will occasionally take small vertebrates. It is a secondary cavity nester, preferring to nest in a woodpecker-excavated treehole, or perhaps in a crevice in a cliff or even a building. It frequently uses nest boxes, especially in places that have seen much human modification including removal of potential nesting sites (i.e., old trees and snags).

Conservation and Recommendations The American Kestrel is one of many open-area species that likely benefited from land clearance in the 19th and early 20th centuries, but has subsequently declined where cleared land has reverted to forest. It is still regarded as North America's most common raptor, but Breeding Bird Survey data show significant long-term declines across Canada and in British Columbia (Environment Canada 2014). The reasons for the decline are not well known (Environment Canada 2011), but the trend toward more intensive industrial agriculture may be reducing habitat quality, including nest site and prey availability (Smallwood and Bird 2002), particularly on wintering grounds. Despite declines in the north, this species has maintained a stable population across its overall range in North and South America.