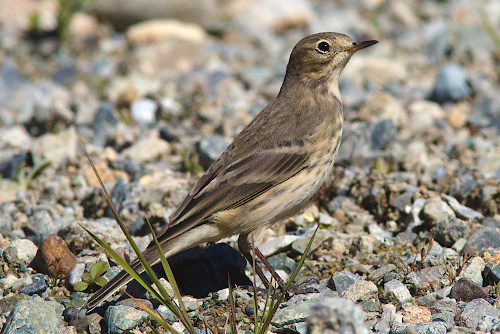 Characteristics and Range The pipit (Anthus) genus numbers more than 40 species worldwide; the American Pipit is one of only two (the other is the Sprague's Pipit Anthus spragueii) that breed in North America. It is a cryptic, open country bird, readily found on its alpine and tundra breeding grounds only when singing during its parachuting display flight. Three of the four subspecies breed in North America, mostly in Arctic and alpine regions, extending south through the Rocky Mountains to isolated, localised mountain ranges farther south. They migrate short to moderate distances to winter at lower elevations and latitudes across southern and coastal areas of the continent, and south to Central America (Hendricks and Verbeek 2012).

Distribution, Abundance, and Habitat The American Pipit is widely distributed across the province, occurring in most of British Columbia's higher mountain ranges. In general, the pattern of distribution from Atlas records is similar to that depicted in The Birds of British Columbia, but the Atlas discovered the first confirmed breeding on Vancouver Island, and a cluster of records indicating that breeding is widespread in the East Kootenay.

The Probability of Observation model indicated that American Pipits are most likely to be found throughout the Cassiar-Columbia (including Omineca), Rocky and Coast Mountains. Campbell et al. (1997) considered the species was most numerous in the Northern Boreal Mountains and Southern Interior Mountains. Atlas abundance data combined with Pobs results suggest this is still the case, but too few point counts were completed at higher elevations to tease out abundance differences between ecoprovinces. The species is very much commoner above 2,250 m elevation than below.

The American Pipit breeds almost exclusively in alpine habitats, which on the coast can be as low as 600 m (e.g., above the Skeena River mouth), but rise with treeline on two axes, west to east from the coast to the interior, and north-south with decreasing latitude (British Columbia Ministry of Forests 2008). The bird chooses nest sites in well vegetated areas, sheltered by overhangs of turf or stones, and begins nesting as soon as small patches of habitat become snow-free (Campbell et al. 1997).

Conservation and Recommendations The American Pipit population is large; 80% breeds in Canada, but British Columbia's responsibility for global stewardship is relatively low. Trend data indicate a slight decrease since 1970 which has stabilised (Environment Canada 2011). In British Columbia, potential climate-change impacts on vegetation types are the main concern, with a potential 60% reduction in the area of alpine habitat over the next 20 years through colonization by trees and shrubs, and a near-total loss in about 80 years (Hamann and Wang 2006). Suppression of fires that would otherwise periodically lower the treeline compounds this effect.