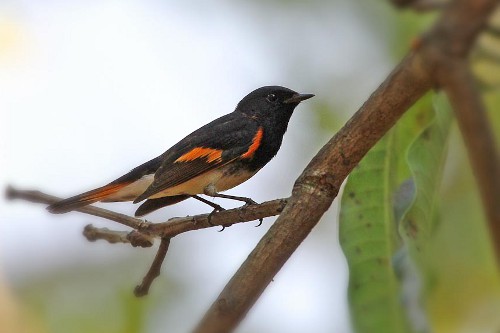 Characteristics and Range With flashing tail feathers and unmistakeable black-and-orange males or yellow-on-gray females, this active warbler adds splashes of delightful colour with its acrobatic aerial manoeuvres in the shadows of the mixed woods where it resides. A long-distance migrant, it breeds across the boreal and eastern biomes of North America, and in parts of the Great Basin and Rocky Mountains, and winters mainly in the Caribbean, coastal Mexico, Central America, and northern South America (Sherry and Holmes 1997).

Distribution, Abundance, and Habitat Breeding is widespread, primarily east of the Coast Mountains, but does occur in all terrestrial ecoprovinces. The general breeding distribution during the Atlas period had not changed greatly since The Birds of British Columbia was published in 2001, although the Atlas confirmed breeding to be more widespread in northern parts of the province, perhaps due to increased observer coverage.

The provincial centre of the American Redstart population remains on the plateaus dissected by abundant watercourses in the Sub-boreal Interior Ecoprovince (Campbell et al. 2001). This is where high values of Probability of Observation are most extensive, and abundance based on point counts is much higher. This centre of abundance spilled into the Rocky Mountain Trench and adjacent Peace River lowlands. Smaller patches of high Pobs values and moderate abundance are found in the Fort Nelson and Liard river lowlands of the Taiga Plains, and in the Northern Boreal Mountains along the Stikine River valley and its tributaries. American Redstarts breed across a wide altitudinal range, down to sea level on the coast and up to 2,250 m in the Southern Interior Mountains Ecoprovince. The highest abundance is in the 500-1,000 m elevation bracket and in the Sub-boreal Spruce, and secondarily in the Boreal White and Black Spruce and Interior Cedar-Hemlock biogeoclimatic zones.

Habitats used in British Columbia Are complex. They are often mixed deciduous-coniferous forests but also include pure stands of Trembling Aspen (Populus tremuloides). Tall shrubs are an important component of all habitats, with willow (Salix) and alder (Alnus) species, Red-osier Dogwood (Cornus stolonifera), and Water Birch (Betula occidentalis) frequently observed. Association with water along streams or the margins of swamps and ponds is common.

Conservation and Recommendations While Canada's overall global responsibility for conservation of American Redstart is ranked highly, with 80% of the world's breeding population (Environment Canada 2011), the species is of low conservation priority in British Columbia, with a much smaller percentage of the global population. Maintenance of healthy and diverse riparian habitats is important to this warbler. Post-logging development of mixed second-growth habitats may benefit the species, but the harvesting of extensive aspen stands in some parts of the province may have detrimental results for this and other species.