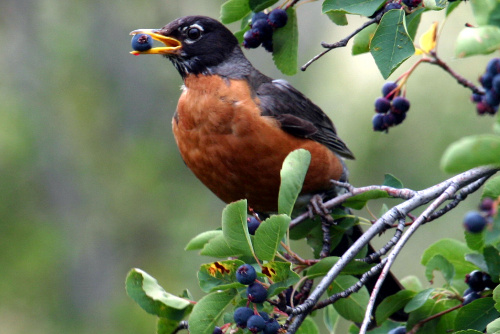 Characteristics and Range The American Robin is one of the most common birds in North America, and its distinctive plumage, song, and approachable nature make it one of the best-loved, too. It is the largest thrush in North America, with a range that covers virtually all of the treed parts of the continent, extending patchily beyond the treeline in the far north. In British Columbia, the Atlas recorded American Robins in more 10-km squares (3,329) than any other species. It is a partial migrant: most northern breeders move short distances to wintering grounds farther south, but a significant number stay in southern British Columbia through the winter months. This is especially the case in the Fraser Valley and southern Vancouver Island (Campbell et al. 1997), which mark the northernmost part of the American Robin's regular wintering range.

Distribution, Abundance, and Habitat The American Robin is widespread throughout British Columbia, from suburban backyards to treeline, and only absent from the highest peaks. It is most densely distributed in southern, central, and northeastern parts of the province. The range is unchanged since The Birds of British Columbia was published in 1997, but the more extensive coverage of the Atlas and the species' conspicuous nature meant many small distribution gaps were filled.

The American Robin is almost certain to be found across most of the province, but reaches its greatest abundance in the Georgia Depression Ecoprovince, as noted by Campbell et al. (1997), followed by the Coast and Mountains, and then Central and Sub-Boreal Interior ecoprovinces. Accordingly, it is most common in Coastal Douglas-fir and Western Hemlock biogeoclimatic zones, followed by Sub-Boreal Pine-Spruce and Sub-Boreal Spruce.

American Robins use all but the very highest elevation habitats, wherever there are both open areas for feeding and trees for nesting, but are most abundant below 250 m (in coastal regions), where abundance is double that at any other elevation. Highest abundance in the interior is between 750 and 1,000 m, above which abundance values gradually drop off to 2,500 m. The American Robin adapts very well to human modified habitats and indeed forest conversion, urbanization, and agriculture have created more habitat for this species. Despite the negative effects of pesticides and pollution like heavy metals in urban/suburban areas, the American Robin generally thrives in close association with human activities (Vanderhoff et al. 2014).

Conservation and Recommendations Breeding Bird Survey results from Canada show a stable long-term trend for American Robin populations, although in British Columbia there is a significant decline over this time. For such a common bird, the factors controlling population trends are poorly understood. There is some speculation that population is limited by availability of grassy foraging sites and inconspicuous breeding locations, safe roosting sites and access to abundant fruit crops in winter (Vanderhoff et al. 2014). There have also been demonstrated negative impacts of some pesticides and pollutants (Vanderhoff et al. 2014), although these have apparently not been implicated in regional declines.