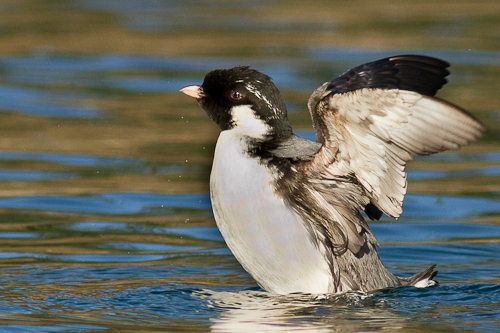 Characteristics and Range The Ancient Murrelet can be considered "the" seabird of the Haida Gwaii archipelago, where an estimated 50% of the global population breeds. Its breeding range spans the temperate North Pacific Ocean, from Haida Gwaii north and west through the Aleutian Islands and south to Korea, and it winters in coastal and offshore waters in the same general areas, south to about 40°N (Gaston and Shoji 2010). This small, nocturnal, burrow-nesting species possesses a diverse vocal repertoire, and is unusual in that its two precocial offspring go to sea, accompanied by their parents, just two days after hatching in the nest.

Distribution, Abundance, and Habitat In British Columbia, the Ancient Murrelet is only known to breed in colonies scattered throughout Haida Gwaii, although small numbers may breed elsewhere. The species forages mainly along the outer edge of the continental shelf in summer, and is seldom seen from land due to the remoteness of its breeding range.

It is locally abundant on Haida Gwaii, where 11 island groups designated as Important Bird Areas support breeding colonies (IBA Canada 2015). However, outside of Gwaii Haanas National Park Reserve and Haida Heritage Site, and Langara Island, few breeding colonies were surveyed during the Atlas period because they are located mainly on remote islands that are unlikely to have human visitors.

The Ancient Murrelet is quite flexible in its choice of breeding habitat on Haida Gwaii (Major et al. 2012). The species usually digs its nesting burrow under live tree roots, fallen trees, or stumps, but will also use natural cavities. Burrow density tends to be lower than in other auks (Gaston and Shoji 2010).

Conservation and Recommendations British Columbia has a very high global responsibility for Ancient Murrelet conservation. Black Rats (Rattus rattus), Norway Rats (R. norvegicus) and Raccoons (Procyon lotor) introduced to Haida Gwaii have seriously impacted Ancient Murrelets throughout the archipelago. The colony at Langara Island, for example, which may have been the largest in the world, was decimated due to unintentional rat introductions from fishing operations (Bertram 1995). Effective rat and Raccoon control at colonies, notably at Langara Island, has been shown to increase Ancient Murrelet abundance, and is a conservation priority at many sites (e.g., Regehr et al. 2007). Ancient Murrelets are also vulnerable to oiling at sea and to human disturbance (e.g., logging of colony sites). The combination of these threats led to the species' Special Concern designation under the Species at Risk Act (Environment Canada 2011). Investigating linkages between breeding populations on Haida Gwaii and wintering populations in waters off Vancouver Island, including the Strait of Juan de Fuca and the inner Salish Sea, would assist management efforts.