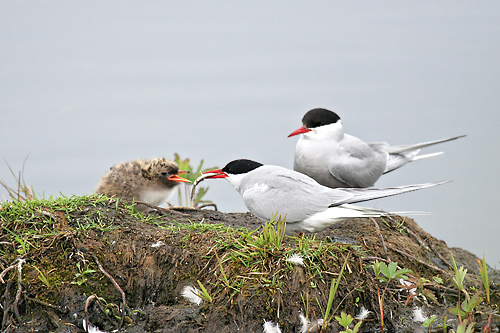 Characteristics and Range With annual migration flights from the Arctic to the Antarctic and back, individual Arctic Terns likely experience more hours of daylight in a year than almost any other species on the planet. The Arctic Tern has a circumpolar breeding distribution covering the Arctic and sub-Arctic regions of North America, Europe, and Asia. In North America it breeds throughout the tundra, and along the Atlantic coast as far south as Cape Cod (Hatch 2002) and in the west on inland lakes south to northwestern British Columbia, and isolated coastal sites in the Salish Sea (Manuwal et al. 1979, Mlodinow et al. 2006).

Distribution, Abundance, and Habitat In British Columbia it breeds mostly in the northwestern portion of the province (Southern Alaska Mountains, Northern Boreal Mountains and northern parts of the Coast and Mountains ecoprovinces) with isolated breeding by single pairs in the Central Interior and Georgia Depression ecoprovinces during the atlas period. In British Columbia, breeding records are mostly of single pairs, and occasionally, very small colonies of less than ten pairs (Campbell et al. 1990, D.F. Fraser personal observation).

The Atlas and Campbell et al. (2009) expand the known breeding area across a larger portion of northern British Columbia from that known when The Birds of British Columbia was published in 1990. Breeding in the central interior was first documented in 2009, but likely occurred since 2006 (Campbell et al. 2009). The breeding pair in the Georgia Depression was first documented during the Atlas period.

Breeding occurs from sea level to above treeline (1,500 m). The highest Probabilities of Observation are in the extreme northwest of the province, along the river systems that drain into the Pacific Ocean, with a lower likelihood of finding the species on higher altitude lakes in the Omineca-Cassiar Mountains farther east.

Conservation and Recommendations The majority of this species population in British Columbia is in remote, freshwater areas that experience few threats, so there are no major provincial conservation concerns. Some marine-foraging Arctic and Atlantic Canada colonies are showing declines or being abandoned (Environment Canada 2011).