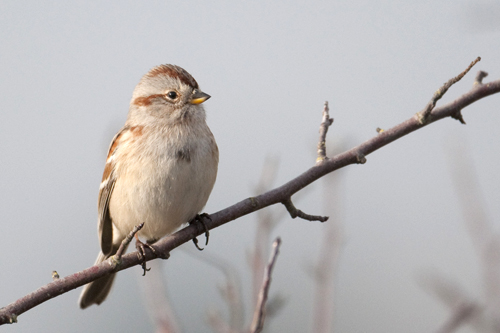 Characteristics and Range The American Tree Sparrow breeds across North America's boreal, taiga, and southern tundra regions. It has a bright rusty crown and eye stripe, bicoloured bill, and a small dark spot on the centre of an otherwise plain breast. It is a familiar backyard feeder bird in winter and on migration across central and eastern parts of the continent. Most breeding birds migrate east of the Rockies so it is uncommon to rare in British Columbia outside the breeding season. It reaches the southern limit of its breeding range in northern British Columbia. Two subspecies are recognised; S. a. ochracea breeds in British Columbia (Campbell et al. 2001).

Distribution, Abundance, and Habitat Almost all the records for the American Tree Sparrow come from the Northern Boreal Mountains Ecoprovince, with the densest clusters in the Haines Triangle of the far northwest and the Cassiar and Omineca mountains. The centres of distribution and abundance have not changed since The Birds of British Columbia was published in 2001. Atlas records in the northern Coast and Mountains Ecoprovince were in higher elevation habitats, but it is uncertain if these were in fact breeding birds or simply late migrants.

Throughout much of its range, the American Tree Sparrow breeds near the northern treeline where the taiga gives way to open tundra (Naugler 2014). Similarly in British Columbia, it nests at high elevations near the altitudinal limits of trees and in subalpine meadows (Campbell et al. 2001). Atlas records came both from around the treeline and from valley meadows below treeline, where cold valley air creates a "reverse alpine" and coniferous forests grow on mountain slopes.

The lowest elevation records came from the Haines Triangle and the Liard River lowlands, and the highest records from the Cassiar and Omineca mountains. Adequately surveying for this sparrow is difficult in northern British Columbia, where the highest densities are between 1,250 and 1,500 m. It is most common in the Spruce - Willow - Birch and to a lesser extent in the Boreal Altai Fescue Alpine biogeoclimatic zones where it inhabits open spruce (Picea) and willow (Salix) scrub. It may breed more widely in the Northern Boreal Mountains than illustrated, but due to the remoteness of its nesting habitat, it is rarely encountered, unless sought during inventories such as the Atlas.

Conservation and Recommendations Christmas Bird Count data indicate a substantial decline in American Tree Sparrow populations over the past 40 years (Environment Canada 2011) but the precision of this trend estimate is low. The species is not well sampled by the Breeding Bird Survey because most survey routes lie south of the breeding range. There are no obvious large-scale threats and the cause of this apparent decline is unknown.