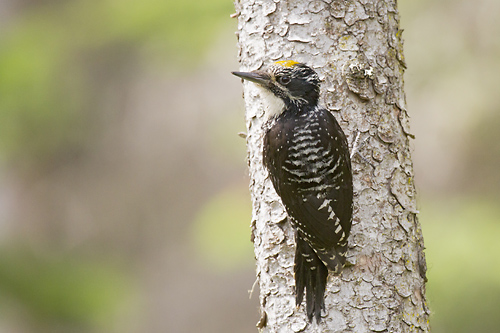 Characteristics and Range The American Three-toed is one of two woodpecker species in North America that have 3 toes on each foot, and breeds farther north than any woodpecker on the continent. It is a quiet denizen of spruce (Picea) forests and heavily reliant on bark beetles (Scolytidae) for food. American Three-toed Woodpeckers are resident throughout their range which spans the Boreal Forest from Pacific to Atlantic coasts, and south through portions of the Coast, Cascade and Rocky mountains. Occasional winter irruptions may see movements as far south as the Great Lakes region bordering the Great Plains (Leonard 2001).

Distribution, Abundance, and Habitat American Three-toed Woodpeckers breed throughout the interior of the province but are sparsely distributed within and west of the Coast Mountains. The Atlas confirmed breeding for the first time on Vancouver Island and in the lower Skeena River valley, but Atlas distribution is much as described when The Birds of British Columbia was published in 1990. Elevation use ranges from 90 to 1,350 m in the Coast and Mountains Ecoprovince, and from 350 to 2,150 m across the interior ecoprovinces.

The probability of observing an American Three-toed Woodpecker is 60% higher in the Sub-boreal Interior Ecoprovince than in the next-ranked, neighbouring Northern Boreal Mountains and Central Interior ecoprovinces. Atlas point count data indicate that the species is equally common in the Sub-boreal Interior, Northern Boreal Mountains, and Southern Interior ecoprovinces. Abundance varies by elevation, with peaks likely reflecting regional differences; 80% of interior Atlas observations were made between 750 and 1,250 m, of which half were around 1,000 m.

This woodpecker is largely associated with coniferous stands in the boreal, sub-boreal and sub-alpine zones where various spruce (Picea) species are usually dominant, and at the upper limits of the Douglas-fir (Pseudotsuga menziesii) and Western Hemlock (Tsuga heterophylla) forests. Highest abundance and PObs values both come from the Sub-boreal Spruce, Sub-boreal Pine-Spruce and Montane Spruce biogeoclimatic zones. Campbell et al. (1990) reported nests in spruce, Trembling Aspen (Populus tremuloides) and Lodgepole Pine (Pinus contorta). Irruptions may occur into recently burned habitats. Trees with disease such as heart rot are often important for the provision of nesting cavities.

Conservation and Recommendations Breeding Bird Survey data indicate an increasing trend in British Columbia as well as Canada-wide, although data reliability is considered low, and there appear to be no population level conservation concerns (Environment Canada 2011). Timber harvesting, fire suppression, habitat fragmentation, rapid cutting rotations and salvage logging can have negative implications for the species and have contributed to declines in parts of North America (Leonard 2001). Trees under attack by bark beetles provide a good food source for woodpeckers, but are in conflict with timber production and aesthetic management objectives, so productive woodpecker habitats can be degraded by pest management strategies such as aerial spraying and salvage logging. Setting aside habitats for American Three-toed Woodpeckers and the wider community of bark beetle-feeding, cavity nesting species should be considered in forest harvesting plans. Population monitoring for this and other woodpeckers is recommended because woodpeckers are keystone/facilitator species, and indicators of forest condition and forest bird communities in general (Drever and Martin 2010).