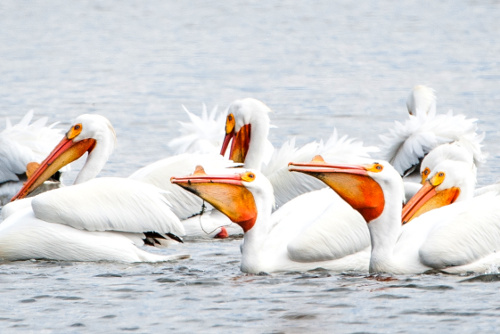 Characteristics and Range American White Pelicans are noteworthy for their graceful flight, large size, white plumage, and enormous pouched bill. The species breeds in scattered, larger wetlands in western and southern North America, and winters in the United States Southern Coastal Plains and coastal California through Mexico and Central America (Knopf and Evans 2004).

Distribution, Abundance, and Habitat In British Columbia, American White Pelicans are only known to breed in the Central Interior Ecoprovince on islands in Stum and Puntzi lakes, with foraging occurring on shallow lakes in the surrounding area. During the Atlas period, breeding was only recorded from Stum Lake, although birds were seen in two other 10-km squares in the Central Interior Ecoprovince, including on Puntzi Lake. Munro and Cowan (1947) reported unconfirmed breeding activity at Charlotte, Puntze (sic) and Tzenaicut lakes, although Paul (1959) indicated that there was no proof of breeding at these locations. In 2013, the year after the Atlas field seasons, breeding was confirmed for the first time at Puntzi Lake, with photographs taken of flightless young on the lake. Breeding was also observed in 2014 on Puntzi Lake, but only after the first nesting attempts at Stum Lake had failed (Steciw 2015).

The population estimate for British Columbia is 1,100-1,200 birds, and the estimate for the number of breeding pairs is 300-500 (Steciw 2015). American White Pelicans are prone to deserting nests because of human disturbance (literature reviewed in Knopf and Evans 2004) and this has been shown to be an issue for the British Columbia population (Bunnell et al. 1981, Campbell et al. 1990). In addition to human disturbance, other disturbances appear to be detrimental as well. In two years during the Atlas period, nest abandonment at Stum Lake was attributed to the presence of a Woodchuck Marmota monax on a breeding island (Steciw 2015).

Conservation and Recommendations The American White Pelican is on the British Columbia Red List and is one of only three species listed as Endangered under the British Columbia Wildlife Act, due to its small, extremely localised, and vulnerable breeding population. Stum Lake and 19 surrounding foraging lakes used by the pelicans are protected under the British Columbia Park Act and the British Columbia Forest and Range Protection Act respectively. Similar protection is required at the Puntzi Lake breeding location. Despite the protections afforded the pelicans by the province, wholesale nest abandonment has occurred frequently, likely due to some form of disturbance. Camera monitoring during the breeding season may help determine the cause. American White Pelicans may be nesting in other areas in the province where there are islands in shallow lakes, and birders are encouraged to report nesting observations. Care should be taken not to disturb nesting birds; approaching closely is not advised.