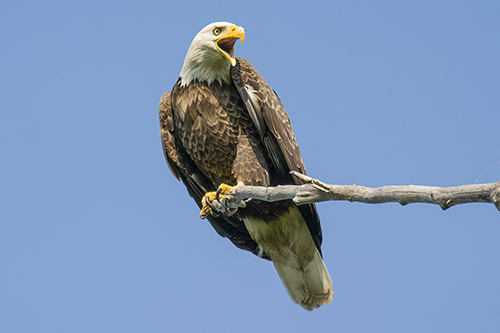 Characteristics and Range The Bald Eagle is a large, powerful North American raptor that has undergone dramatic population fluctuations over the past two centuries. Once abundant, it declined during the 1900s initially through hunting and then pesticides, primarily DDT, lowering reproductive output. Today, the Bald Eagle is a conservation success story, with populations recovering across the continent; it now breeds as far south as the Florida Keys in the east and Baja California in the west. The Bald Eagle is versatile in its prey choice, which may have assisted the population recovery; it takes a wide range of fish, birds, mammals and reptiles, and also scavenges prey or pirates food from other species. On the Pacific Coast, Bald Eagles are now consuming more birds, such as gulls and waterfowl (Hayward et al. 2010, Vermeer and Morgan 1989, White et al. 2011), and locally even refuse (Elliott et al. 2006), perhaps in response to competition for fish prey.

Distribution, Abundance, and Habitat The Bald Eagle is widely distributed throughout British Columbia, especially along the coast, and in inland regions with extensive, treed river and lakeshore habitats. The Atlas fills distribution gaps in the north, especially around Williston Lake, compared with The Birds of British Columbia published in 1990. Highest Probabilities of Observation are in the Coast and Mountains and Georgia Depression ecoprovinces, and far northwestern rivers draining into the Pacific Ocean, with point count data indicating that local abundance is highest in the Coast and Mountains Ecoprovince. The Probability of Observation model corresponds well with Bald Eagle distribution, showing moderate to high Pobs values along major rivers, lakes and reservoirs in southern and central interior regions, and Williston Lake in the Sub-Boreal Interior Ecoprovince. Point count data indicate that local abundance in the interior is much lower than along the coast. Most Bald Eagles breed below 500 m elevation.

The Bald Eagle is primarily associated with aquatic habitats, especially estuaries and fjords along the coast, and rivers, lakes, and reservoirs with forested shorelines or cliffs in the interior. Eagles mate for life, and build their nests near the tops of large trees, which they typically use and enlarge each year. There may be one or more alternate nests within a breeding territory. In treeless regions, nests may be located on cliffs or the ground. Although susceptible to human disturbance, Bald Eagles nest in urban and suburban areas when sufficiently large nest trees are present; in Vancouver, the number of active Bald Eagle nests increased from 5 to 16 from 2004-2009, with 12 active nests recorded in 2013 (Straker 2013).

Conservation and Recommendations Data from raptor migration studies suggest the western North America population has been stable since the late 1990s (Farmer et al. 2008), although winter surveys indicate a slight declining trend in the southern Strait of Georgia (Crewe et al. 2012). The population in British Columbia may be re-establishing an equilibrium level after a strong recovery period over the last two decades. Whilst there are no population level concerns, individual Bald Eagles may be vulnerable to threats such as pesticides, collisions with power lines, oil spills, loss of shoreline nesting, perching, roosting, and associated aquatic foraging habitat to human development, disturbance, fishing gear entanglement, and reduction in high quality fish prey (Fraser et al. 1985, 1996).