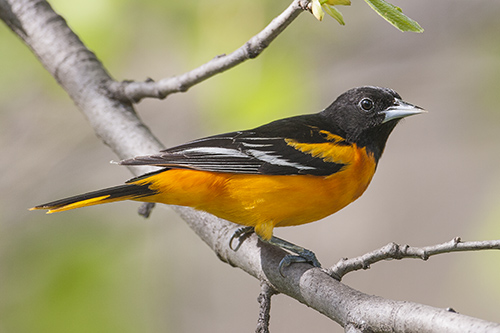 Characteristics and Range Its bright, distinctive plumage and loud whistling song make the Baltimore Oriole a familiar bird to even a casual observer east of the Rocky Mountains, and long after the birds have left and the leaves have fallen, the oriole's unique pendulous nest remains fixed to small twigs high in the treetop, inspiring memories of warm summer days past. The Baltimore Oriole is the eastern counterpart to the Bullock's Oriole, and the two species were collectively known as "Northern Oriole" for a relatively brief time in the late 20th Century. Individual species status has since been restored (Monroe et al. 1995). The Baltimore Oriole breeds in temperate forest and parkland habitats across eastern North America and westward through the northern Great Plains. Northeastern British Columbia represents the westernmost limit of its breeding distribution. The species winters primarily in the West Indies and southern Mexico, south through Central America and northern South America.

Distribution, Abundance, and Habitat The Baltimore Oriole has spread into British Columbia fairly recently, with breeding first documented in 1960 (Weber 1976). Atlas data indicate that the species is found almost exclusively within the Peace River lowlands of the Boreal Plains Ecoprovince. This is generally similar to the range described in The Birds of British Columbia, except that Campbell et al. (2001) noted possible breeding farther north in the Taiga Plains. If the species is restricted to the Boreal Plains, this would be in contrast to most other eastern North American species in British Columbia, whose breeding ranges typically extend farther north to include the Fort Nelson lowlands.

Within its restricted range in British Columbia, the Baltimore Oriole is uncommon to fairly common in suitable habitat (Campbell et al. 2001). The Baltimore Oriole is found in mature and old deciduous forest, particularly Trembling Aspen (Populus tremuloides). Occupied sites tend to be warm, low-elevation and often near water or forest edges. Atlas point count data show it to be much more common below 500 m than above that elevation. The preference for open deciduous woodland is consistent across its breeding range (Rising and Flood 1998).

Conservation and Recommendations Long-term Breeding Bird Survey data show a large decline across its range, including within British Columbia where data are limited and trend reliability is low. Baltimore Oriole was added to the Blue List (Vulnerable) in British Columbia in 2015 because of the declining trend, the small range documented by this Atlas, and the increasing industrial development (for forestry, oil and gas) within its preferred habitat. Continued monitoring of abundance and distribution within the province is recommended.