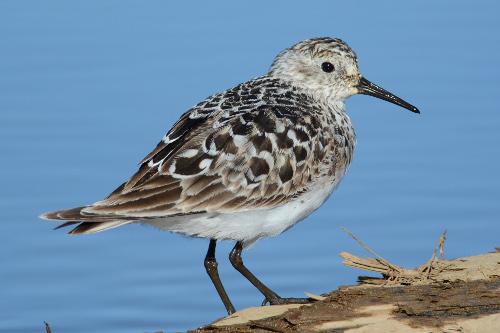 Characteristics and Range For most British Columbian birders, experience with the Baird's Sandpiper is limited to encounters with juveniles during fall migration; only relatively recently was it learned that Baird's Sandpipers breed in the province. The breeding range spans the High Arctic from northeast Siberia across Canada to western Greenland, and some mountain ranges slightly farther south (Moskoff and Montgomerie 2002, Dement'ev and Gladkov 1951). The long-distance migration in this species is unusual, with young of the year dispersing widely across the continent and adults migrating very quickly down the cordilleras, stopping mostly at high elevation sites. Wintering is mostly in southwest South America, both along the coast and up to 4,000 m in the Chilean Andes (Moskoff and Montgomerie 2002).

Distribution, Abundance, and Habitat Van Damme (2007) reviewed the records suggestive of breeding in British Columbia, which date back to the 1970's. The first confirmed breeding was a newly hatched chick in July 1996 in muskeg habitat in the Haines Triangle (Campbell et al. 2001). Moskoff and Montgomerie 2002 fail to map this area, and it is not shown on maps in any popular field guide. Van Damme (2007) also notes finding at least three pairs of Baird's Sandpipers at Kelsall Lake, including a pair with 4 chicks and another pair at Kusawak Lake with a single chick. All of these records are within the Northern Boreal Mountains Ecoprovince.

The sole record during the Atlas period is of a bird flight singing over the sparsely vegetated terminal moraine that forms the edge of a glacial lake at the Netland Glacier, by the Alsek River, 85 km west of the previously documented breeding areas in the Haines Triangle. Flight singing in this species is described in Miller et al. (1988). This record, in the Southern Alaska Mountains Ecoprovince, was relatively late in the breeding season (17 July 2010); clutch completion as late as 21 July has been noted elsewhere in the species range (Moskoff and Montgomerie 2002).

Habitats used for breeding in North America vary widely, including dry tundra, wet muskeg, alpine slopes and terraces, on moist and drier ground, bare and vegetated, often in matrices (Myers et al. 1982, Moskoff and Montgomerie 2002). The species uses areas that are free of snow early in the season (Parmelee et al. 1967). Given the large area in which the species breeds and movement of chicks soon after hatching, regional and temporal differences in habitat use are likely. In British Columbia, Van Damme (2007) found chicks in muskeg habitats.

Conservation and Recommendations The Haines Triangle area of British Columbia is poorly known and has some of them most recent breeding bird discoveries in the province. Species such as Baird's Sandpiper, Parasitic Jaeger and perhaps others appear to be breeding there in isolated populations far from the majority of these species' ranges. A more complete picture of the avifauna of this unusual part of the province is needed.