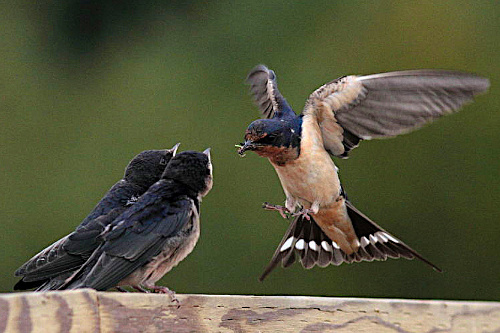 Characteristics and Range The Barn Swallow doesn't seem to have a care in the world as it dips and darts through the summer air. Its deeply forked tail distinguishes it from other North American swallows and it has a remarkable way of drinking pond-water while in flight. The Barn Swallow eats insects, which it captures in mid-air over open land or water, and has a close association with humans, having almost entirely switched to nesting on artificial structures from caves and natural crevices, a process that in North America began before European settlement (Brown and Brown 1999). The Barn Swallow is a long-distance migrant, and one of the most widely distributed birds in the world, breeding across North America, Europe and northern Asia, and overwintering mainly in Central and South America, Africa, southern Asia and Australia.

Distribution, Abundance, and Habitat The Barn Swallow breeds in lowlands, valleys and on lower-elevation plateaus throughout British Columbia. Atlas records do not show any appreciable change in distribution since The Birds of British Columbia was published in 1997, except perhaps in the Sub-Boreal Interior ecoprovince where distribution gaps are filled as a result of increased survey coverage.

This active bird is much more common in the Georgia Depression than in any other ecoprovince. However, the Probability of Observation model suggests that there is a similar chance of finding Barn Swallows at lower elevations across much of the province, including in the Northern Boreal Mountains in the far north, where Barn Swallows may very locally reach similar abundance as in some areas of the south, but will be limited by available nest sites. The largest colony reported to the Atlas, and the only one with more than 20 nests, was 44 active nests on southern Vancouver Island. Colonies of 10-20 active nests were reported from just ten sites, all but one in the southern third of British Columbia; a further 17 colonies had 5-10 active nests.

The Barn Swallow is much more common below 250 m than above that elevation, and more common in coastal than interior biogeoclimatic zones. It occurs in open areas, including agricultural land, lowland foreshores, floodplains and even alpine meadows. The Barn Swallow builds its nest on a variety of artificial structures from barns to bridges, and in natural locations like cliffs, steep embankments and even caves. It also nests over busy porch doors and, if left undisturbed, will return to the same site yearly.

Conservation and Recommendations Breeding Bird Survey data from the past 30 years show this species to be declining rapidly, the strongest declines being in the more northern breeding areas, especially eastern Canada (Nebel et al. 2010). This prompted its recent assessments of Threatened in Canada (COSEWIC 2011) and Blue-listed in British Columbia, although it may still be more numerous than it was prior to European settlement. The causes of the decline are not well understood, but climate change and perturbations (e.g., cold snaps), changes in aerial insect populations, and habitat loss and degradation through agricultural intensification, draining and infilling of wetlands and demolition of barns and other rural structures favoured for nesting, are suggested reasons (COSEWIC 2011). Education and public awareness programs are needed to reduce destruction of existing nest sites and colonies due to human intolerance of noise or droppings.