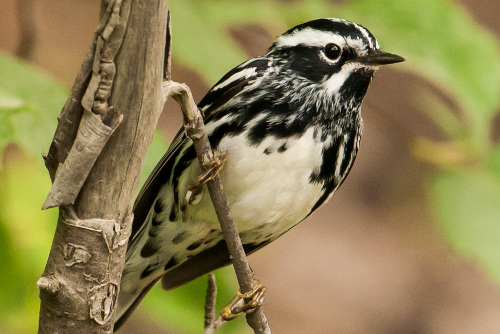 Characteristics and Range This warbler is easily identified by its boldly-streaked plumage and unusual foraging behaviour. It is unique among North American wood warblers in that it creeps along the trunks and larger limbs of trees in a manner similar to a nuthatch. It also commonly gleans insects from foliage, a more conventional foraging technique for warblers. The high, thin song is not as distinctive as the bird's appearance or behaviour. The Black-and-white Warbler breeds throughout much of eastern North America, from the Atlantic coast of the Maritimes south though the temperate forest belt and west through the Boreal Forest to the Rocky Mountain foothills. It is a short- to medium-distance migrant that winters across an extensive area from the Southern Coastal Plains and the West Indies through Mexico and Central America to northern South America (Kricher 2014).

Distribution, Abundance, and Habitat The Black-and-white Warbler is found almost exclusively east of the Rocky Mountains, primarily within the Boreal Plains and Taiga Plains ecoprovinces and adjacent major river valleys extending well into the foothills of the Rocky Mountains in the Sub-Boreal Interior Ecoprovince. This is very similar to the known breeding range when The Birds of British Columbia was published in 2001. Any expansion in range is likely due to increased observer effort during the Atlas survey period.

The highest Probability of Observation values were from the Fort Nelson lowlands, with slightly lower values from the Peace River lowlands. Point count data indicated that abundance did not differ between the Boreal Plains and the Taiga Plains ecoprovinces. The species was most commonly found between 250 and 500 m elevation. These figures closely match abundance and elevation patterns described in Campbell et al. (2001), who considered the species to be most numerous in the Taiga Plains Ecoprovince.

Within its primary range of low elevation forest in the Boreal and Taiga Plains ecoprovinces, the species was found in deciduous and mixed wood forest. Mature stands may be preferred, but the species is also found in younger pole-staged stands, brushy areas and edges. Site moisture appears to be important: standing water may or may not be nearby, but ground vegetation is characteristic of moist or damp sites (Campbell et al. 2001). The presence of tall willows (Salix species) is a good indicator of Black-and-white Warbler habitat (Enns and Siddle 1996, Phinney 1998). Nests are built on the ground, usually at the base of a tree or fallen log.

Conservation and Recommendations The Black-and-white Warbler is not a conservation concern in British Columbia or Canada. Canadian Breeding Bird Survey trends are generally stable. Although preferred breeding habitat continues to be cleared for industrial or agricultural development, the species' affinity for riparian habitat (which is often protected) and tolerance for edges and younger forest suggests that habitat loss in British Columbia is not likely to be a significant threat.