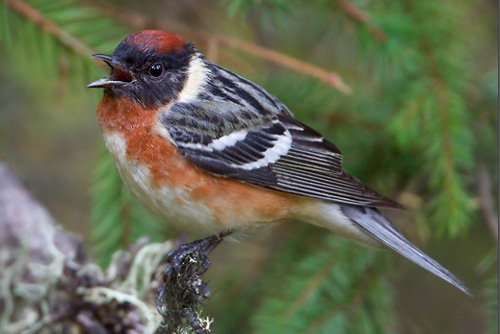 Characteristics and Range The Bay-breasted Warbler is a beautiful bird of the Boreal Forest, reaching the western limit of its breeding range in northeastern British Columbia. The male sports a streaked grey, white, and black back and wings, a black and yellow face, and a ruddy-chestnut cap, throat and flanks. The female is a less showy version of this with more muted plumage colours. Bay-breasted Warbler populations fluctuate in response to Spruce Budworm (Choristoneura fumiferana) numbers, an irruptive moth whose caterpillars cyclically provide hyper abundant food in spruce and fir forests. Because Bay-breasted Warbler habitat is often far from centres of human population, it is one of North America's least-studied warblers. It is a long-distance migrant, wintering in Central America and northern South America (Venier et al. 2011).

Distribution, Abundance, and Habitat The centre of distribution for the Bay-breasted Warbler in British Columbia is along the Fort Nelson and Peace rivers and their tributaries in the northeast. The relatively few Atlas observations expand somewhat on the breeding season distribution noted in the The Birds of British Columbia published in 2001, chiefly by filling some gaps, but do not represent a major change. The Bay-breasted Warbler is a bird of the upper forest canopy and has a high-pitched song, so even where it is common it can be difficult to detect.

The most extensive higher Probability of Observation values are along the Fort Nelson and Liard rivers, their tributaries, and surrounding lowlands in the Taiga Plains Ecoprovince, the area that also supported the highest abundances. The Bay-breasted Warbler is very much a bird of lower elevations in British Columbia, with most birds found below 500 m, almost entirely within the Boreal White and Black Spruce Biogeoclimatic Zone.