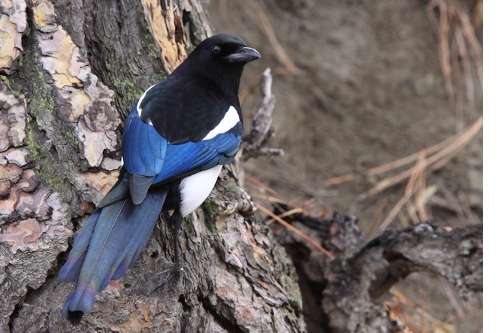 Characteristics and Range This charming and charismatic species is easily recognized by its bold patterning and chatty personality. The Black-billed Magpie's long, fan-like tail, contrasting black, white and deep blue plumage, and conspicuous nature make it one of the most striking birds in Canada. Magpies are members of the crow family (Corvidae) along with crows, ravens and jays, all highly intelligent, inquisitive, and adapt well to human-modified habitats. The Black-billed Magpie is non-migratory and has a long history of association with humans. Historically, magpies often followed Aboriginal Peoples as they hunted bison herds, to feed on the refuse (Trost 1999). The Black-billed Magpie's present range spans the North American Great Plains and western basins, with an apparently disjunct population in northwestern British Columbia, southern Alaska and Yukon (Trost 1999). Although some authors group this species with the Eurasian Magpie (Pica pica), the North American species does not demonstrate the well-known object collecting behavior of its Eurasian counterpart and is more often considered a separate species based on behavior, calls and genetics (Trost 1999).

Distribution, Abundance, and Habitat The range of the Black-billed Magpie in British Columbia is clustered within the main valley systems of the Southern and Central Interior, the Southern Rocky Mountain Trench, on the Interior Plateau, and in the Peace River lowlands. A small population in the extreme northwest represents the easternmost extent of the Alaskan population. A few scattered records in the Northern Boreal Mountains suggest possible linkage exists between the two apparently disjunct North American populations. The Black-billed Magpie's distribution has expanded northward into the Central Interior since The Birds of British Columbia was published in 1997. The Atlas also shows the loss of the small population in the Georgia Depression.

Black-billed Magpie is most likely to be found within the valleys of the Southern Interior and the lowlands of the Boreal Plains Ecoprovince. Atlas point counts corroborate this showing the highest abundance in the Southern Interior, as noted by Campbell et al. (1997), and at elevations below 750 m.

Black-billed Magpies prefer semi-open areas with scattered trees in natural and anthropogenic habitats. Highest abundances occur within the Bunchgrass, Ponderosa Pine and Interior Douglas-fir biogeoclimatic zones. Magpies are opportunistic omnivores; as year-round residents their distribution is most limited by the availability of overwinter food sources, and they commonly rely on human settlements especially in the northern sections of its range (Trost 1999).

Conservation and Recommendations There are no conservation concerns for this species. The Black-billed Magpie population has shown little change since the 1970's based on the Breeding Bird Survey. Its adaptability to human-altered landscapes suggests it will continue to thrive.