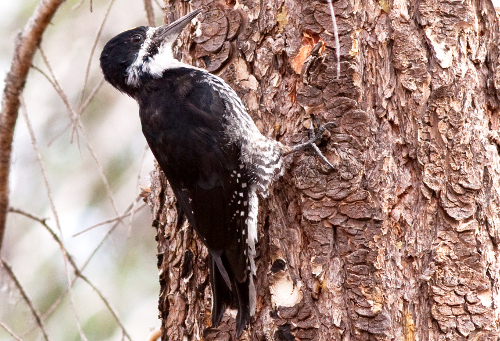 Characteristics and Range The Black-backed and the American Three-toed Woodpeckers are the only 2 species of woodpecker in North America that have 3 toes on each foot. The Black-backed breeds almost as far north as its counterpart and occupies a similar distribution across the Boreal Forest from Alaska to the Atlantic Coast, through the Cascade and northern Rocky mountains, south to the Sierra Nevada. The species is largely resident within this range but irruptions and winter movements may bring birds south to the Great Lakes and northern Appalachian Mountains (Dixon and Saab 2000).

Distribution, Abundance, and Habitat Black-backed Woodpeckers are relatively widespread in all of the interior ecoprovinces, but very sparsely distributed in the northerly portions of the Coast Mountains. The Atlas results approximate to the distribution known when The Birds of British Columbia was published in 1990, except that the range during the Atlas period extends farther west and more extensively north across the interior plateaus.

The probability of observing a Black-backed Woodpecker is low everywhere, and only slightly higher in the Omineca Mountains and northern Rocky Mountain Trench area in the Sub-boreal Interior and Northern Boreal Mountains ecoprovinces. Too few observations were made on Atlas point counts to draw firm conclusions, but abundance appears to be highest in the 750-1,000 m elevation band, which is where 48% of all observations with elevation data were made.

Conservation and Recommendations Canada's responsibility for global conservation stewardship is ranked very high (Environment Canada 2011), but British Columbia's responsibility is rated only medium by the British Columbia Conservation Data Centre. The species may be declining, although trend data are difficult to interpret due to the low sample sizes. Fire suppression and post-fire salvage logging have negative implications for the species (Dixon and Saab 2000). Reserving a percentage of fire-killed stands from salvage logging may be a way of retaining some essential habitat.