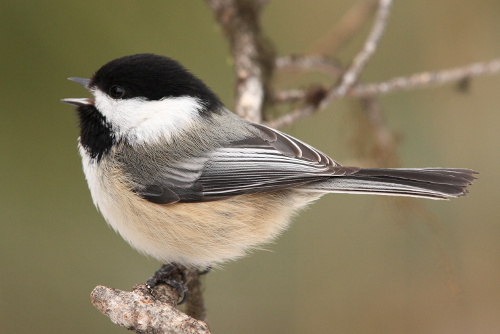 Characteristics and Range Among the most familiar of passerines, the Black-capped Chickadee is especially well known for frequenting bird feeders. This North American species occupies deciduous and mixed forests from Pacific to Atlantic coasts, and from the southern Boreal Forest to the southern Rocky and Appalachian mountains. This is a non-migratory species. In order to cope with the energetically demanding cold temperatures and short days during the winter, northern populations can lower their body temperature (regulated hypothermia) to save significant amounts of energy (Foote et al. 2010). Black-capped Chickadees are "scatter-hoarders", storing thousands of seeds in different places with the extraordinary spatial memory to relocate this cached food.

Distribution, Abundance, and Habitat Of the four species of chickadee that occur in British Columbia, the Black-capped has the most extensive distribution except in coastal regions, where it is essentially absent from Vancouver Island, the Gulf Islands, Haida Gwaii and much of the mainland north of the Sunshine Coast. Resource competition with the Chestnut-backed Chickadee may in part account for its coastal absence; however, where the two species co-occur, they exploit different micro-habitats. Open water is an unlikely barrier to dispersal since numerous birds with similar wing-loading occur on offshore islands. This distributional anomaly is an intriguing question that warrants further investigation. The provincial distribution has changed little since The Birds of British Columbia was published in 1997, but the increased sampling during the Atlas helped fill distribution gaps in the Sub-Boreal Interior Ecoprovince.

The Probability of Observation model and Atlas point counts indicate a complex spatial pattern of abundance. The highest local abundance by some margin is in the lower Fraser Valley of the Georgia Depression Ecoprovince, contrasting with Campbell et al. (1997) who considered it most numerous in the Southern Interior and Southern Interior Mountains ecoprovinces. Moderate Atlas abundance values in the valley systems of these ecoprovinces are similar to those in the Peace River lowlands in the Boreal Plains Ecoprovince, and on the Interior Plateau and upper Skeena catchment of the Sub-Boreal Interior Ecoprovince. This chickadee favours lower elevations, being most common below 750 m.

Conservation and Recommendations The Black-capped Chickadee is prone to population fluctuations; it appears to be increasing modestly in eastern parts of its range, but is showing a general declining trend in the western portion of the range (Foote et al. 2010). In Alaska, it has been experiencing a high rate of avian keratin disorder, an emerging disease that causes gross beak deformities (Handel et al. 2010). Whilst this forest generalist can adapt to disturbed and suburban habitats with suitable nest sites (including nest boxes) and a sufficient prey base for juveniles, research in northern British Columbia suggests that disturbed (logged) habitats are poorer quality with lower recruitment than undisturbed habitats (Fort and Otter 2004).